Feb. 14
3:07 AM – A female subject in the 100 block of Dixon Dr. stated her boyfriend came to her apartment drunk and was banging on the back door trying to come in. The male subject left prior to officers’ arrival; unable to locate.
12:06 PM – Complainant at Walmart forgot he requested $20.00 cash back at the self-checkout. When the subject went back to the store, the money was gone.
11:58 PM – Employee at Brown Chevrolet stated two kids were looking in the vehicles and knocking on the windows. The kids left prior to officer’s arrival; everything was okay.
Feb. 15
12:30 PM – Officers assisted DPS with a request for a field test for possible narcotics on traffic stop in the 900 block of Hwy. 132 N.
5:03 PM – A set for keys was found by the ATM at Security Bank.
Feb. 16
12:34 PM – A male subject was laying behind an a/c unit in the 600 block of E. Hondo Ave. The subject was ID’d and found to be highly intoxicated and jailed.
4:13 PM – Officers searched the 400 block of Corley for a blue SUV that was involved in a physical disturbance in Natalia; unable to locate.
10:27 PM – Verbal disturbance between a male subject and a female subject in the 100 block of Coker Ave. over family issues; all was okay.
10:57 PM – Officer dispatched to IH-35 SB in reference to a black Dodge all over the roadway; unable to locate.
Feb. 17
12:10 AM – Officer dispatched to Walmart in reference to a lost phone. The phone was tracked off a field on CR 771; later determined as a theft.
12:35 AM – Four teenagers at Windy Knoll Dr.
2:34 AM – An orange Hyundai hatchback kept driving in the area of the 500 block of Ehlinger Ave.; unable to locate.
1:35 PM – A white van was driving up and down Ross; unable to locate.
1:36 PM – Complainant advised of a vehicle parked under a tree in the 400 block of Cardinal Dr. Officer made contact; a male subject was reading.
9:04 PM – Complainant at Walmart attempted to apprehend a blonde female in a football jersey and shorts that had concealed $19.70 worth of merchandise in her purse. The female subject did not cooperate and left the location in an SUV.
Feb. 18
1:51 AM – Pursuit coming from Frio County on access road in speeds in excess of 100 mph. Vehicle crashed in Frio Co.
5:04 AM – Officer assisted a Medina County Deputy with a suspicious activity call in the 1600 block of CR 7711. The homeowner was not on location and could see several of what appeared to be flashlights in the back yard; all appeared okay.
7:17 AM – Complainant believed someone was in a building in the 100 block of N. Bright Dr. Building was cleared; all was okay.
10:14 AM – Four fictitious checks were passed at a business in the 600 block of E. Hondo Ave. The checks were used as payment for merchandise.
2:05 PM – An open storage unit in the 500 block of Hayden Ave. was secured.
6:20 PM – Complainant in the 500 block of Ingram Rd. advised there was a red pickup that picked up a couch. Officers made contact with the individuals in the pickup, who stated they were picking up the couch for a female subject. Officers spoke to that subject, who confirmed. Officers made contact with the complainant and confirmed those statements; all was okay.
8:30 PM – Officer dispatched to the 600 block of E. Hondo Ave. in reference to a female inside a car parked by a dumpster for over an hour. Vehicle departed prior to officer’s arrival.
11:25 PM – Complainant advised he left his truck in the parking area by baseball field for game. When he returned, he noticed items missing from the truck, including a tool box, backpack, bluetooth speaker, tools, and school supplies. Complainant left the parking area around 4:00 pm and came back from the game around 11:00 PM. Estimated amount of items is $500.
Feb. 19
3:20 PM – Report of a hit and run vehicle traveling northbound on IH-35 with front damage; unable to locate.
5:24 PM – Complainant in the 200 block of Moore Ave. advised several vehicles were running stop signs and requested a patrol-by.
10:30 PM – Complainant in the 600 block of W. Davis Ave. and her husband stated their son was threatening them. The son was found to be in possession of more than 2 oz. of marijuana and was jailed.
Feb. 20
10:14 AM – Complainant at the library found a Chevy key ring with a wand. Complainant advised she’d had the key ring since Feb. 13, thinking someone would come to claim it.
4:01 PM – A male subject in the 1200 block of Devine Dr. was in an argument with his parents and was at home breaking things. Officer made location and gave the male a ride to 6th St. in Natalia. 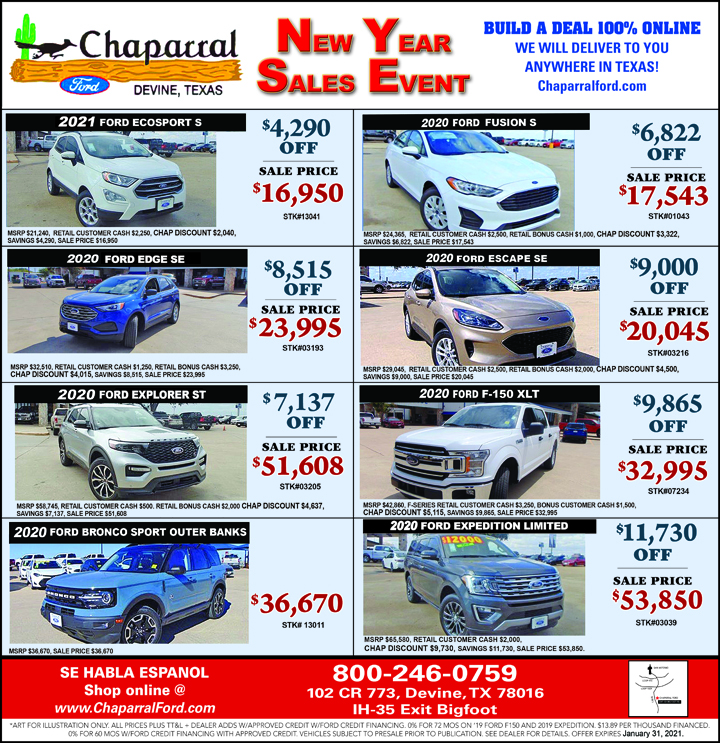