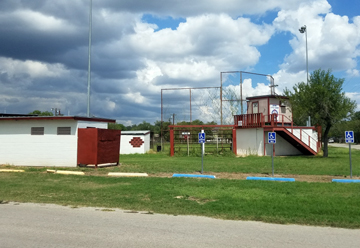 The Devine City Council pushed back against Devine Little League Board President Juan Zamora’s request that the contract between the two entities be amended to reflect his proposed changes.
Zamora petitioned Council for revisions regarding who maintains the Little League facility and has access to the fields during the offseason, and for the City to pay for the League’s water usage at the facility for a year.
The issues were only discussion items during the Special meeting on September 8, but were action items at the Regular meeting scheduled for press night on Tuesday, Sept. 15.
Maintenance
Zamora’s first requested contract amendment at the Sept. 8 meeting involved maintenance of and access to the facility.
Devine Little League games are played on a City-owned facility on Upson Drive. In a meeting on Sept. 10, 2019, Council voted to amend its contract with the Little League, at the Little League’s request, to take on maintenance outside the fields’ fences during the six-month offseason and help renovate the bathrooms. The Little League Board agreed to open the fields to the public during the offseason.
Zamora offered two alternatives to that agreement.

District 3 Councilman David Espinosa suggested having City Attorney Tom Cate, who was not at the meeting, sit down with Zamora to talk about the situation.
Randall posted the meeting agenda on her political Facebook page and said that District 5 residents were not in favor of the City paying for the League’s water usage. She also said that the contract amendments the City agreed to in 2019 didn’t transform the facility into park, just opened it up for resident use during the offseason in exchange for the City taking over mowing outside the fences during that time.
“You guys were in agreement,” Randall said. “I was here at that meeting, I remember. And you may have later decided not to, but that night it was, ‘Sure, you could do that; we don’t have a problem with that.’ I remember it.
“So bringing us something like this, saying that you want us to take care of everything or nothing? Well, my district is going to say, then, nothing.”
Zamora disagreed with the ‘everything or nothing’ description of his proposed alternatives, and added that the Board gets new members all the time.
“This was a different Board that came to you, made this request, and agreed to the request,” Zamora said.
“If it’s going to change that often, then why should we make a contract with you ever?” Randall asked.
Zamora again disputed the ‘everything or nothing’ description.
“I never said anything or nothing,” Zamora said. “I said if the City wants it to be a park for the community where everybody has access, then it would make sense that the City manage it. And the other alternative was if the City will continue to maintain it, the exterior, and we still have to maintain the interior, then let us not open it up to the public. That’s what I said. I think they’re two reasonable options.”
By Marly Davis
Staff Writer