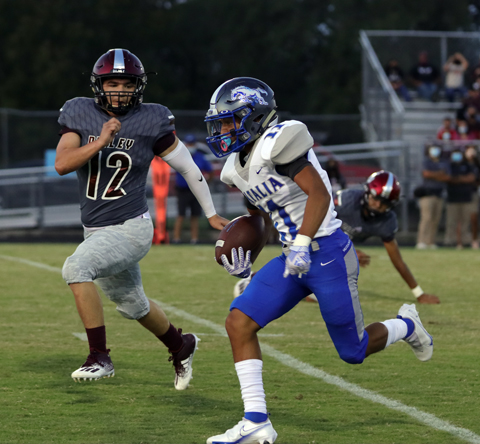 Stockdale Outlook
The Brahmas return five starters back on both sides of the football from a program that went 7-3 overall, finished in 3rd place a season ago and is picked by most to finish in 4th in 15-3A (Div.II) this season. The Brahmas did upset Odem in the first round of the playoffs a season ago, before falling to Comfort 28-7 in the Area Round of things.
This season, Stockdale fell hard in their opener vs. Schulenburg 40-0 before dropping a week two battle vs. a Flatonia squad who is coming off a win over Falls City. The Bulldogs defeated Stockdale 25-6 before Stockdale was able to win the district opener a week ago.
“Stockdale has moved to a 2-back-gun offense (similar to ours),” Natalia Head Coach Ilyan Martinez said. “They are under a new offensive coordinator this season and they are still trying to get comfortable with it, but each week they are getting a bit better.”
Junior Cutter Clancy will lead the Brahmas at the QB position this season. “He is a hard-nosed kid who does a great job of running the ball as well as managing the offense,” Martinez said. “Ian Wubbena (Sr. RB) is also an athletic kid and he can make plays if he gets out in space. Sophomore RB Jake Gann is also a big physical kid who runs the ball hard and does a great job without the ball with his blocking ability.”
According to Martinez, their offensive and defensive line is the strength of their team.
“With their size and strength, they will create some challenges for us up front,”
Martinez said.
Defensively, the Brahmas have three young men that stood out for Martinez.
“They have gone to the split-cover-3 defense Coach King has run for a long time,” Martinez said. “Last year, they based out of an odd front and will still get into it some on the long yardage situations, but their base defense is a split.”
“Wubbena (Sr. LB) has a nose for the ball and does a great job of playing downhill,” Martinez said. “Gann, their Soph. LB is a big and physical kid who does a great job of taking on blockers. Junior DE Ryan Reynolds is one of their biggest kids and we can hold the edge as good as anyone we have played all season.”

Natalia Outlook
The Natalia Mustangs are hoping to continue a true four quarter well rounded game like they put together last week vs. Dilley. Natalia had a ton of contributions offensively that went from the line to nearly every skilled kid on the field.
Defensively, Natalia was able to not only force turnovers, but turn those into touchdowns as well.
“We will have to be the most physical team on the field,” Martinez said. “They are well-coached who plays hard and I expect us to be in a dog-fight all night long. The team that can limit the mistakes and established the line of scrimmage will win the game in my opinion.”
Natalia’s offensive and defensive lines have truly rose to the occasion in each of their first three games in my opinion and I believe Friday night they will do the same.
The kickoff will be at 7:30 p.m. in Wilson County at Bobby Russell Field. Be sure to grab your tickets online which went on sale Monday, show up early, wear blue, be loud and cheer the Mustangs on in their second 15-3A (Div.II) battle of the season!
By Eric Smith
Staff Writer