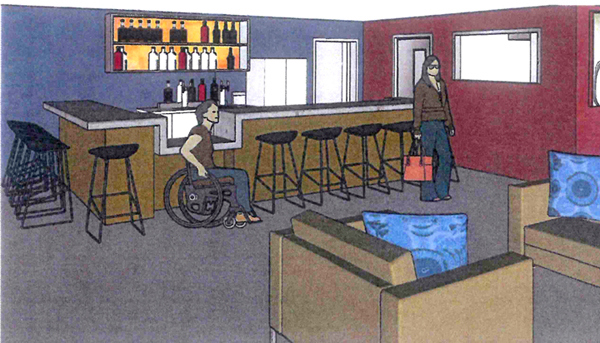 Bidding on the Devine Golf Course clubhouse renovation will begin soon following City Council’s unanimous acceptance of GRG Architecture’s 100 percent completion documents during the meeting held last Tuesday, November 17.
A Public Notice advertising for bids will be published in the News for two weeks before submissions are evaluated and Council votes to approve a contractor.
Architect Edward Garza estimated that between the bidding period, contractor negotiations and mobilization, and the slate of upcoming holidays, work on the clubhouse likely won’t begin until February 2021, and will take four to five months.
Garza pointed out that the project focuses largely on necessary improvements rather than aesthetics.
“There are 33 sheets for mechanical, electrical, and plumbing, and that just kind of underscores what the majority of the work and cost is,” Garza said. “It’s very little on the architectural side and it’s very heavy on the utilities that are required.”
Council approved a $342,000 renovation plan in August, and approved a three-year, $450,000 tax note in September to pay for the construction.
The City will continue to pay SG Golf Management, the company in charge of the golf course’s day-to-day operations, $32,530 a month until the clubhouse’s renovation is complete.
A motion by District 5 Councilwoman Debra Randall and District 1 Councilman Rufino “Flipper” Vega to accept the completion documents passed 5-0 with votes from District 2 Councilman Steve Lopez, District 3 Councilman David Espinosa, and District 4 Councilwoman Kathy Lawler.
Clubhouse porch
Garza had called into question the safety of the clubhouse’s front porch overhang in previous meetings, and Council directed City Engineer Raul Garcia to examine the structure and report back.
Garcia estimated that fixing the overhang would cost around $30,000, which is not included in GRG’s budget or scope of work, but recommended that the City leave it be for the time being.
“Why fix it if it’s not broken?” Garcia said. “My recommendation is to leave it as is.”
A Randall-Espinosa motion to pass on overhang repairs passed 5-0.
By Marly Davis
Staff Writer