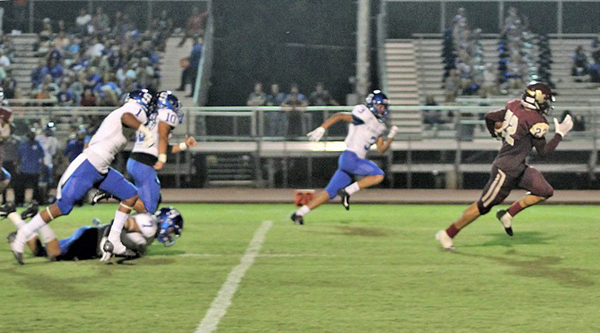 It was a tough loss for the Devine Warhorses last Friday night in their home opener. Somerset scored late in the 4th quarter to pull out the 33-28 victory. The Horses are 1-1 on the season.
“I thought our boys played really hard and fought to the end, but we had too many missed tackles throughout the ball game,” stated Head Coach Paul Gomez. “We had defenders all around the ball but we just didn’t wrap up to complete the tackle.”
Coach Gomez gave a lot of credit to Somerset’s elusive running back, Hunter Hernandez, who was strong, quick, and had great vision for the holes in the Warhorse defense. Gomez stated last week that he believed Hernandez would be one of the best running backs they would face all season and I sure hope he is right because that kid put on a show Friday night.
“When our guys actually hit and wrapped up,” Gomez continued, “we were able to control him and even forced a fumble. We just were not consistent on that. We had our opportunities to win.”
After a ho-hum first half that ended with Somerset in the lead 10-6, the second half picked up dramatically with touchdowns being scored on what seemed like each and every teams possession.
Isaiah Oropeza got Devine on the board early in the first with 5-yard run but Somerset countered with a 1-yard touchdown run and a 34-yard field goal as time expired before halftime.
With 10:37 left to go in the third quarter, Oropeza hit Mason Burford for a 25-yard score to put the Horses back in the lead 14-10. The Bulldogs bounced back quickly on a Hernandez 75-yard run :37 seconds later.
Somerset kicker nailed a 20-yard field goal with 6:01 left in the third to put his team in the lead 20-14. Yet another quick score from the Bulldogs on a Kole Detmer to Christian Salinas 21-yard pass increased their lead to 27-14.
This is where the Horses began to make a run. Justin Contreras scored on a 21-yard run but the extra point attempt was no good. Devine trailed 27-20.
Oropeza scored his second touchdown of the night on a 3-yard run. Contreras added the 2-point conversion to put the Warhorses up 28-27 with 3:12 left in the game.
That lead was short-lived however as the Bulldogs bounced back on a 3-yard run with 2:17 left in the contest. That was all she wrote as Somerset took the 33-28 victory.
Costly mistakes
Missed interception opportunities and penalties ultimately doomed the Warhorses. Big plays that could have gone Devine’s way were called back more times than not because of unnecessary penalties.
Justin Contreras had a great night rushing for the Warhorses but it could have been even bigger. Over 100 yards rushing and at least one touchdown were nullified due to yellow flag troubles.
Penalty flags also cost the Horses a big passing gain and a first down deep in Bulldog territory.
“We can’t make those mistakes against good teams like Somerset and our kicking game has got to get better,” Gomez said. “Missing extra points, kicking the ball out of bounds, and not punting the ball well hurt us by giving them great field position all night. Special teams can win or lose ballgames.”
Even with all the miscues and missed opportunities, Devine was in the game until the final ticks of the scoreboard were exhausted.
“I felt we should have won so it burns a little bit more, but our kids fought hard all night and never gave up. We just have to clean the game up but the effort has been great.”
Gomez described last week’s practice as a “rollercoaster” with lots of “highs and lows” and little “consistency.” The lack of discipline in practice in all phases of the game reared its ugly head. Devine had some positive plays but then would counter it with a negative play or two.
“Games can’t be won like that,” Gomez specified. “I told the boys after the game that it’s amazing how what we did during the week would be almost the exact same outcome as the game.”
Games are won and lost by the quality of the team’s practices during the week. That tough lesson was learned Friday night.
Gomez finished by saying, “We will definitely get back to work and keep grinding to get better. We have a tough Legacy team waiting for us on Friday and we will have our work cut out for us.”
Scoring recap
DEV—Isaiah Oropeza 5-yard run (PAT failed), 5:33, 1st.
SOM—D’Angelo Romero 1-yard run (Justin Valenzuela PAT), 4:14, 2nd.
SOM—Valenzuela 34-yard FG, 0:00, 2nd.
DEV—Oropeza 25-yard pass to Mason Burford (Oropeza 2-pt run), 10:37, 3rd.
SOM—Hunter Hernandez 75-yard run (Valenzuela PAT), 10:00, 3rd.
SOM—Kole Detmer 21-yard pass to Christian Salinas (Valenzuela PAT), 3:12, 3rd.
DEV—Justin Contreras 21-yard run (PAT failed), 2:05, 3rd.
DEV—Oropeza 3-yard run (Contreras 2-pt run), 3:12, 4th.
SOM—John Duenas 3-yard run (2-pt run failed), 2:17, 4th.
Team stats
Total yards—Devine 302, Somerset 359 First Downs—Devine 11, Somerset 16 Rushes/Yards—Devine 30/253, Somerset 37/183 Passing—Devine (Oropeza) 5 of 16 for 49 yards and one touchdown, Somerset (Detmer) 13 of 20 for 176 yards Fumbles/Lost—Devine 2/2 Somerset 6/4.
Warhorse stats
Rushing—Buddy Santos 4 for 91; Justin Contreras 7 for 89, 1 touchdown; Leonard Pompa 7 for 30; Sergio Martinez 2 for 28; Isaiah Oropeza 8 for 17, 2 touchdowns; Xsavior Martinez 1 for 1; Brady Hackebeil 1 for -3 Passing—Oropeza 5 of 16 for 49 yards, 1 TD Receiving—Santos 2 for 29; Mason Burford 2 for 26, 1 TD; Pompa 1 for -6.
Up next
Devine travels to San Antonio Southwest Legacy Friday night. Kickoff is set for 7:30pm.
By Jerel Beaty
Staff Writer