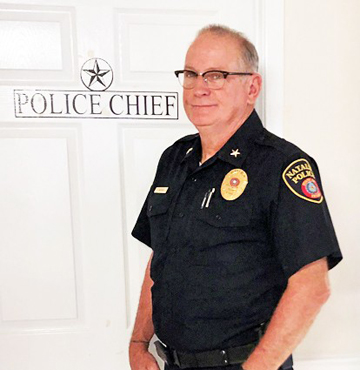 Glenn P. Barrow was sworn in as Natalia’s new chief of police by City Administrator Lisa Hernandez on Monday, October 7, after being hired for the position during a special Natalia City Council meeting held last Thursday, Oct. 3.
“This is my community,” said Barrow, who has a country residence near Natalia. “I felt the need to serve my community.”
Barrow was chosen from a pool of 10 applicants and comes to the City from a position as deputy under Medina County Pct. 4 Constable Malcolm Watson. He also served as an officer in the San Antonio Police Department for over 20 years, and taught a Criminal Justice course at Somerset High School.

He takes over from former chief Gilbert Rodriguez, who recently resigned from the position after six years at the helm in order to return to the Medina County Sheriff’s Department.
Barrow said that he likes the idea of growth for Natalia, and favors a community policing approach for the department, whereby officers build ties and trust with residents in order to make neighborhoods safer and minimize crime.
“We all have to work together as a community,” Barrow said. “It’s not us against them.”
There will be a ceremonial swearing-in ceremony for Barrow at the next Regular Council meeting, scheduled for Monday, Oct. 21.
By Marly Davis
Staff Writer