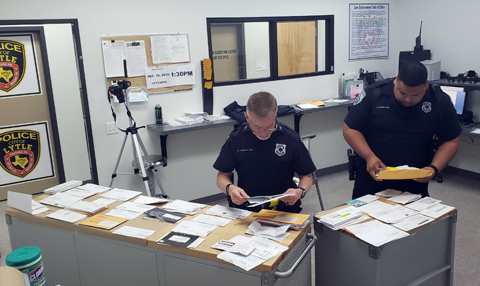 Lytle PD has their hands full this week after finding several bags full of stolen mail among other things this past October 7th.
“The officer stopped him for a traffic stop, and ended up arresting the driver for a suspended license, and the car was being impounded. But we ended up finding bags of stolen mail, credit cards, fake credit cards, checks, wallets that belonged to over 50-60 people,” said Police Chief Richey Priest.
“It looked like they actually took a real credit card and replaced the chips in some instances so it was quite an operation, and we are working with the US Postal Inspectors to sort through the evidence,” Chief Priest.

The traffic stop was conducted around 11:39 PM in the 19500 Blk. of McDonald St. resulted in the arrest of a 37-year-old male from Bexar County.
“It looks like most of the victims are in Bexar County San Antonio area, and there seem to be a lot from a particular apartment complex in San Antonio,” Chief Priest added.
Though this particular bust was made by Lytle PD inside the city, Atascosa County Sheriff stated that mail theft has been a problem in Atascosa County.
“Mail theft has been a problem, mainly on the eastern side of Atascosa County. We have done several stake-outs to combat this problem, but have not come up with anything yet,” Atascosa County Sheriff Soward stated.
If you see anything suspicious or have any information regarding crimes, you can contact Crime Stoppers anonymously. Atascosa County Crime Stoppers can be reached at (830) 769-CALL.
Also, Medina County Crime Stoppers can be reached at 1-800-367-2833.