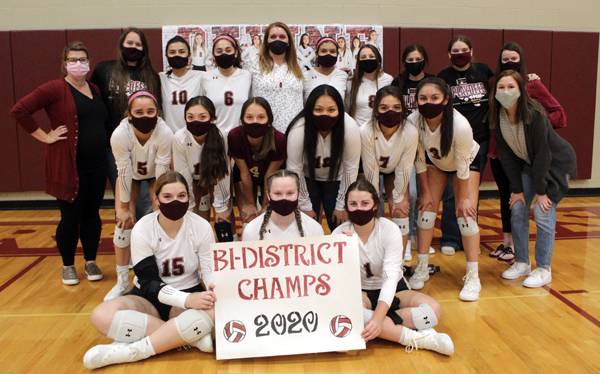 It was a quick night of volleyball for the Arabians on Thursday, October 29th. They faced Pearsall in the Bi-District playoff game. Winning in 3 sets, the Arabians played Robstown last night in George West at 8pm. Robstown beat Hidalgo 3-2 and took 3rd in their district.
Devine and Pearsall started off close but Devine quickly figured out the Pearsall’s offense and were able to dig out the balls they returned. The game was streamed on YouTube by Coach Jim Sessions.
“The girls did a great job considering we hadn’t played in a week. Pearsall did throw us off at times because their attacks aren’t what we were use to seeing. But the girls were able to adjust and started picking up more of those attacks. The girls were very aggressive on the offensive side and had another great night of serving. We had some nerves going in but now every girls has playoff experience and we should be ready to go in Area.” Coach Leigh Anne McIver
Kills: Allison Stevens 1, Megan Runyan 10, Rylee Esquibel 10, Bailey Oropeza 1, Aleyna Gerlach 1, Madison Pike 10. Aces: Stevens 6, Runyan 2, Esquibel 1, Avery Cruz 2. Blocks: Pike 3. Digs: Stevens 1, Runyan 4, Esquibel 2, Kristina Moralez 15, Oropeza 2, Lacey Shook 1, Cruz 2. Assists: Stevens 20, Esquibel 8, Cruz 1.
Else where in 4A, Pleasanton lost to Wimberly 0-3, La Vernia beat Fredericksburg 3-0, Somerset lost to Crystal City 2-3, Carrizo Springs lost to YWLA 1-3, Navarro beat Bandera 3-1, and Boerne beat Cuero 3-0. Results are posted on the UIL website.
By Dicy Chambers
Sports Writer