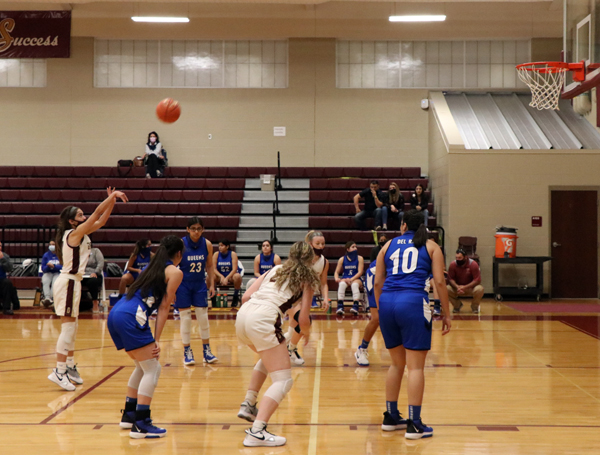 The Arabians suffered their first loss of the season against La Vernia on November 24th. They bounced back to face Navarro the next day to win. Now 5-1 overall, the Arabians are scheduled to play Medina Valley on Saturday, December 5th at 11:30 am.
We played a good first half against La Vernia. We did a great job of being aggressive early and we got out in transition and made some easy shots. In the second half, we struggled to keep La Vernia off of the offensive boards and that allowed them to get back into the game. It also prohibited us from being able to get out into transition. La Vernia was definitely the more aggressive team in the second half and they capitalized on that. They made some tough shots and we missed some of ours. We did a great job of coming back late in the game but we came up a little short in the end. In all, it was a game where we learned a lot. I fully expect this team to grow and get better because of this game.
Points: Kendall Marek 5, Megan Runyan 11, Kadence Yeats 5, Maddie Mata 11, Ally Taylor 12. Rebounds: Lacey Shook 4, Marek 5, Runyan 7, Yeats 2, Mata 6, Taylor 5. Assists: Shook 3, Runyan 1, Yeats 3, Mata 3. Steals: Shook 3, Marek 1, Runyan 3, Mata 6, Cece Martinez 1. Blocks: Mata 1. Q1 15-12, Q2 27-19, Q3 34-34, Q4 44-47. FTP 50%.
We got off to another great start in the Navarro game. We did a good job of sharing the ball with each other and we did a good job of taking care of the ball vs their full court defense early. In the second half, Navarro really stepped up their intensity and the girls did a great job of matching that intensity. We went through some stretches where Navarro hurt us on the glass, but we did a great job of getting key boards when we needed to do so. In the fourth quarter, we struggled a bit with their pressure. We did a great job, however, of getting under control and executing late in the game vs that pressure which led to some key baskets. You could see the confidence of the girls grow during that time. We executed well at the end of the game and made free throws to put the game away. We still have lots to improve upon but the girls are doing a great job of working to get better each game. It was a very solid win for this group.
Points: Marek 2, Yessika Garza 10, Runyan 7, Yeats 3, Mata 17, Taylor 19. Rebounds: Shook 2m Marek 1, Garza 6, Runyan 9, Mata 5, Taylor 1. Assists: Shook 2, Brianna Bowyer 1, Runyan 2, Yeats 3, Mata 3. Steals: Shook 4, Garza 1, Runyan 1, Yeats 1, Mata 3. Q1 17-13, Q2 33-21, Q3 46-37, Q4 58-54. FTP 90%.
Coach Jim Sessions