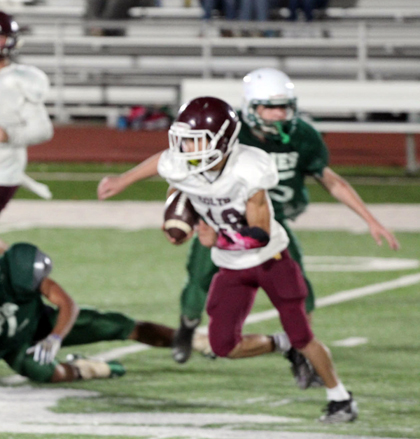 The 8th Grade Devine Colts will always remember their 2021 season as they finished a perfect 9-0 overall including 5-0 in district to claim its championship title. The Colts closed out their unblemished campaign with a 28-12 victory over visiting Crystal City last Thursday at Warhorse Stadium.
“We have a saying that it’s business as usual and we did just that,” Coach Lon Cozby said to begin his post-game, and postseason, analysis. “The kids showed up with an agenda of taking care of business and the business at hand was going undefeated and finishing as District Champs!”
The eventual district champs got things going quickly as Colt quarterback Karter Brown hit split out Mason Beaver for a 20-yard touchdown-scoring reception on Devine’s initial possession of the ballgame. Lucas Rodriguez added the two-point run to spot the Colts to an 8-0 early lead.
Another tremendous play involving Mason soon unfolded in front of the Colt faithful, but unfortunately got nullified due to a penalty. Mason, a two-way player in the defensive secondary intercepted a Crystal City pass attempt in the back of the end zone and returned it 107-yards for a touchdown.
In rehashing that play Cozby stated, “This was a crazy play as Mason picked it then weaved his way in and out to break free. We watched film and never found the block in the back penalty that canceled it out. However, it doesn’t matter because it happened and we all got to see something special.”
From a 107-yard interception return to simply getting the ball on the Javelina two-yard line, the Colts strung together a clock-killing 18-play drive that culminated in a 5-yard touchdown run by Mario Vicente. Christian Monreal tacked on the two-pointer, giving Devine a 16-0 halftime lead.
“This game went by quick, I don’t think the clock ever stopped in the 2nd quarter on that long scoring drive,” said Cozby. “We just kept mashing the ball down the field.”
The third quarter saw the Colts put one more 20-yard Brown to Mason scoring pass on the board. This touchdown bumped the Devine lead to 22-0.
Crystal City did not go down without a fight as they quickly scored on a 90-yard swing pass to cut the Devine lead to 22-6.
Even quicker, however, was the Colts response to the Javelina touchdown.
Devine kick returner Issac Espinoza returned the ensuing kickoff 64-yards kickoff return for the Colts last touchdown of the season.
Crystal City scored one last time on a 29-yard pass to finish out the scoring in Devine’s 28-12 victory.
Although the Colts surrendered their shutout in the second half, the damage had already been done.
“Our defense played tough and our offense was smooth as usual,” Cozby said in his final statements regarding the final game of the season.
Coach speak
Going undefeated is a tough task for any team to accomplish over the course of a 10-game season. Finishing 9-0 and defeating quality opponents along the way makes this a very satisfying time for all that were involved in this magical journey.
Cozby finished his comments on the 2020 season saying, “This has been a fun year. This is a very smart football group and they are very competitive. They really looked up to last year’s 8th grade bunch so at the beginning of this year they wanted to be just like them which was to go 9-0 and become district champs. Crazy to think that we have gone back to back 9-0 seasons at the 8th grade level, but that is exactly what we have done!
This year has been full of crazy highs and multiple intense games that could have easily gone the other way. This group is special and it was an honor to coach these kids and help them mature for the future.”
Special thanks
I personally thank Coach Cozby for the information he supplied regarding his team’s accomplishments and performances throughout the season. He provided detailed scoring recaps, player highlights, and shared many of his own thoughts on his team’s challenges and successes as the 8th grade team recap was at times longer than that of the varsity’s.
My name is attached to the weekly JV articles in The Devine News, but they would not be as thorough or as insightful without Coach Heath Poppe’s post-game emails that he sends to me.
Thanks, Pop! You did your team, your players, and the Warhorse football program right!!
Shout out
Coach Cozby wanted to recognize manager Bryson Robison for his contributions to the team as well as 6th graders Colt Flores, Duke Wheeler, Dylan Hinnant, MJ Lawler, Conner Guzman, Zane Fritz, Nick Martinez who helped out with water, running chains, and other things during the last part of the season
Final 9-0 roster
#2 Ray’sean Beaver, #3 Ryan Weinkam, #4 Deryck Frazier, #5 Mason Beaver, #6 Issac Espinoza, #7 Gavin Williamson, #8 Briar Parson, #9 Cole Davis, #10 Ty Sadler, #11 Bo Wheeler, #12 Karter Brown, #13 Mario Vicente, #16 Jaython Rosales, #17 Hayden Stotts, #18 Jonathan Moralez, #19 Joe Guerrero, #20 Cecilio De La Garza, #30 Christian Monreal, #33 Noah Mata, #35 Cash Menchaca, #37 Diego Valdez, #42 Lucas Rodriguez, #43 Brady Loeffler, #44 Karson Ray, #51 Matthew Pequeno, #55 Riley Gutierrez, #56 Jordan Reyna, #59 Jesus Torres, #60 Raul Reyes, #62 Jeremiah Cardenas, #63 Joselyn Jimenez, #66 T.J. Buvinghausen, #67 Chris Sanchez, Jr., #68 Samuel Morales, #71 Trystan LaFond, #72 Christian San Miguel, #73 Bob Hicks-Hernandez, #74 Nathaniel Martinez, #75 Adrian Rodriguez, #76 Joel Rios, #77 Jackson Hagdorn, #80 Derek Traylor, #84 Tyler Hinnant, #88 Jeremy Steinbrunner, Coach Lon Cozby, Coach Jacob Sanchez, Coach Zac Valenzuela.
By Jerel Beaty
Staff Writer