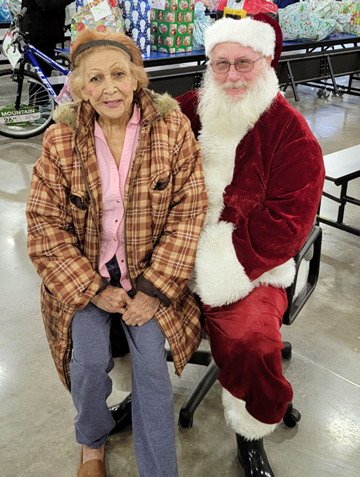 There were smiles, tears, huge hugs and a ton of cheer Sunday afternoon at the Natalia Junior High Cafeteria during the 2nd Annual Heart of a Mustang Toy Drive held in memory of the late Trudy Smith. Toy Drive Volunteers, The Grinch, Santa Claus, the Mustang Mascot, DJ Jon Mendez and the Natalia Fire Department were all on hand to make sure this was a day 115+ Natalia children would never forget.
Organizers were able to raise over $17,000 thanks to donors from 150+ people from 50+ cities around Texas, as well as from an awesome couple from Illinois who was the top individual donor of the event ($2,500). Record-breaking fundraising allowed for students to receive around $100 per child as each family also had the option of a $50.00 gift card from South Texas Hardware (Former True Value-Lytle) and/or a $75.00 gift card from Wal Mart.
Once all families were served, there was approximately $1,800 remaining which will go toward the first ever Trudy Smith-Heart of a Mustang Scholarship program which will be awarded as two scholarships at the conclusion of the 2021-2022 school year.

“The event was such a blessing to not only those that it served, but to those giving back,” Eric Smith Founder stated. “We had big brothers and sisters who raise their siblings; we had parents of course, grandparents and also great-grandparents who are raising kids. You may live in your community, but many times we do not realize the struggles some of these families are faced with. All of this hard work, energy and effort was well worth it seeing the smiles that this brought to the faces of 100+ children on Sunday.”
We hope to host this event annually along with the scholarship drive. Throughout the next few months, we plan to become an official 501c3 non-profit as well.
“I would like to thank all of our volunteers who came to meetings, called families, filled out in-take sheets, went shopping, wrapped presents and showed up to the event,” Smith said. “All in all, we had over 40+ volunteers who pitched in one way or another and none of this would have been possible without their help and the donations from 150+. I know my mother is smiling down from above.”
By Eric Smith
Toy Drive Founder