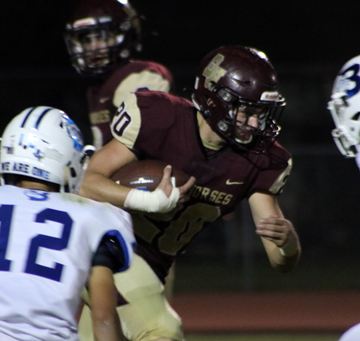 Devine takes on the Mavericks in Pearsall Friday night as the Warhorses look to improve on their current two-game winning streak. The Mavericks on the other hand are looking to upset Devine on their home turf and capture their first win of the season.
The Warhorses are coming off decisive victories against Hondo and Bandera after their district opening loss to Carrizo Springs. Devine bucked the Owls 33-14 before taming the Bulldogs 44-22 behind a big 22-point second half offensive explosion, and defensive shutout.
Pearsall has not gotten in the win column up to this point in the season. A victory at home against the Warhorses would wash the bad taste of eight straight losses from the Maverick’s mouths.
The Mavericks first, and closest, game of the season thus far was a 17-7 defeat against San Antonio Burbank. Since then, Pearsall was shutout in their next four non-district games by a combined score of 189-0 to San Antonio Lanier, Beeville Jones, San Antonio Holy Cross, and Pleasanton.
Pearsall scored twice in their District 15-4A DII opener against Hondo, but fell 56-13. Crystal City downed the Mavericks 28-7 then they lost 60-3 to Carrizo Springs last Friday night.
Maverick stats on the season are not updated in SA Express News but they are led by junior Joey Ramirez.

Gomez’s take
Devine Warhorse Head Coach Paul Gomez breaks down his thoughts on the upcoming Pearsall tilt.
“Even though Pearsall has not won a game this year, we know that they will play their best game against us. We are going to get their best shot! We have to be mature enough to handle success and understand that the reason for that success is the work that’s done Monday through Thursday. Each game is a playoff game and that is how we need to prepare to play each game.
Pearsall always has size and speed. They will be bigger than us but we are used to that! They have a big weapon in Joey Ramirez (#5). He can play running back, he can be their Wildcat quarterback, and he even lines up at receiver. They use him like Hondo does Carson Winchester. Pearsall has good athletes around him and a big offensive line.
Defensively they run a ‘50’ defense and have the capability to be good on that side of the ball. They are not bad, but have had some bad luck this year. They are led by Ramirez on that side as well as he plays safety, and is all over the place out there making tackles. They are big upfront and athletic in the secondary.
We are expecting a dogfight on Friday in Pearsall. I am excited to see my team continue to get better!”
Kickoff is set for 7:30pm.
By Jerel Beaty
Staff Writer