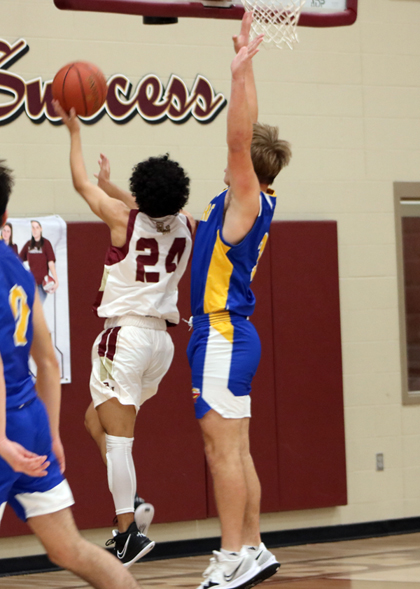 With 7 seniors and 2 juniors, the Varsity Warhorses have an experienced team that with a little more time will be unstoppable. “I am thankful for the 4 seniors who decided to come back and play this year. They are making plays on offense and defense. The 5 returners are showing improvements from last year,” said Coach Evan Eads.
In Dilley on Tuesday, November 16, the Warhorses led most of the game but then lost by one point. It was the Warhorse defense that struggled along with turnovers on offense. “I am proud of the charges we took and of our shot selection. We had several good shots and free throws at the end that could have won the game. I believe those shots will begin to fall,” added Coach Eads.
Marcus Espinosa 4, Sage Cruz 2, Caden Hanson 12, Isaiah Morin 3, Hayden DuBose 2, Kaveri Alvarez 9, Peyton Carr 5, Xavier Contreras 5. Q1 10-9, Q2 23-17, Q3 32-37, Q4 42-43.
Friday night at home, the Warhorses took on Comfort and were ahead at the end of the third but were outscored 19-30 for a 66-71 loss. The last quarter was well played by both teams but the Warhorses struggled with turnovers. “We improved on our defense and scored more points. We struggled at the free throw line. We have to improve there. We were faster on offense and defense. After we get some practices under our belts we will show some real improvements,” said Coach Eads.
Cruz 3, Hanson 29, Ortiz 7, Alvarez 7, Carr 9, Contreras 11. Q1 12-14, Q2 29-30, Q3 47-41, Q4 66-71.
Devine will play in Pearsall after the Thanksgiving break and then head to Marion December 2 and 4 for a tournament. The JV will be in Dilley the same days for a JV tournament.
By Dicy Chambers
Sports Writer