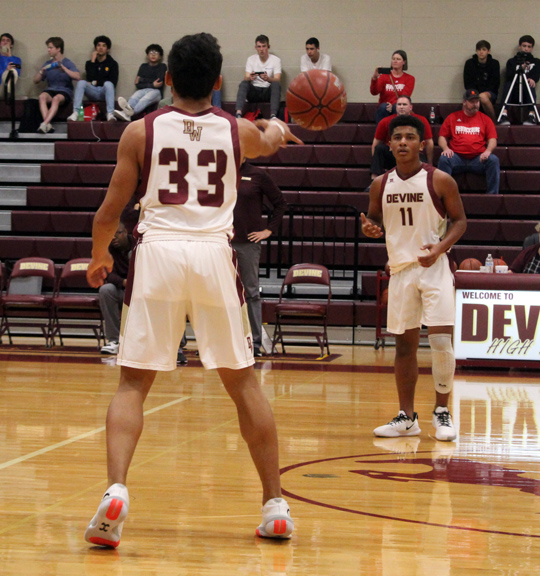 Ending pre-district 13-9, the Varsity Warhorses won their first district game 55-37 against Crystal City January 17th. With this opening win the Warhorses are now 14-9 and 1-0 in a tough district. Hondo beat Carrizo Springs 82-51. Devine played in Pearsall last night and Hondo played Crystal City.
Coach Paul Wells’ team came out strong in the first to take the lead 16-10 at the end of the first quarter. Justin Contreras led the scoring this quarter with 7 followed closely by Kam Adams who scored 6. Crystal City attempted a comeback in the second by scoring 12 points but Devine answered with 14 to end the half 30-22.
The Warhorses scored 12 points in the second with 5 players driving to the basket and holding their opponent to only 6 points. The strong defensive pressure continued into the 4th with Devine holding Crystal City to only 9. Dalton Kramer led this quarter scoring 6 of the 13 points. Devine won 55-37.
Kramer 10, Jose Dozel 2, Sergio Martinez 5, Mason Burford 5, Adams 14, J. Contreras 19. Q1 16-10, Q2 30-22, Q3 42-28, Q4 55-37. FTP 59%
The Warhorses will play in Hondo January 28th and then at home against Carrizo Springs January 31st.
By Dicy Chambers
Sports Writer