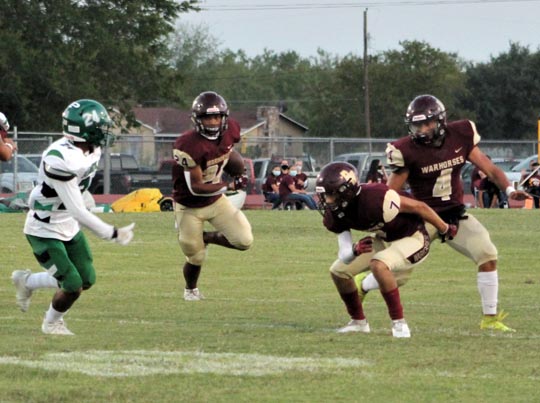 While they were sleeping
Devine’s second touchdown came with no time on the clock going into halftime. Buddy Santos’s 1-yard run was set up by a 47-yard pass completion from Brady Hackebeil to Colin Dishman who had slipped behind an inattentive Eagle secondary.
Dishman caught the ball at the 15-yard line and sprinted to the one before being tackled by two of the three defenders he had initially gotten behind.
The throw was a throw that almost never happened, however. Hackebeil had to avoid a rushing Eagle linebacker at the Devine 43 before heaving the ball from the 45.
In addition, great job by Colin to not give up on his quarterback as the Eagle defenders took their short nap.
Braggadocio
The Warhorses offense can boast that it has now scored on its last possession of the first half in three consecutive games. Touchdowns going into halftime does wonders for a team’s momentum boost going into the second half of play.
Against Uvalde three weeks ago, and last Friday against Pleasanton, the Warhorses also scored their first possession of the second half.
Momentum is real, and the Warhorses being able to finish strong at the end of halves in consecutive games has helped power them to victory.
AAE
Always Available Eads. That is my new nickname for linebacker and offensive slot receiver coach Evan Eads. I can count on Coach Eads Sunday mid-afternoon email with a brief description of how his players performed. This weekend was no different.
“As far as the linebackers, Colin Dishman, Robert Ramirez, Buddy Santos, and Devin Ornelas form a true unit, and the best thing we all saw Friday was they all made plays. We have had too many missed tackles through the first three games, but that was not the case last Friday. Only two missed tackles were recorded. That is very beneficial because we do not give up extra yardage. Now that they know they can perform at a high level they will do it every game,” Eads said of his defensive players.
As for his offensive unit, he has the youngest members in average age of any of the offensive position groups. That youth and inexperience has not been a glaring issue however as these players have performed admirably all season.
“The coaches are very excited about the growth and maturity of these young slots,” Eads stated. “They all run hard and get extra yards after contact whenever their number is called. However, we need to improve on our blocking.”
Thanks “Always Available Eads” for your weekly update!
Flapdoodle
If there is one thing holding the Horses back from receiving straight A’s across the board for their last three victories is not only the number of penalties, but also the timing and types of penalties committed. There is never a good time to commit a penalty, but it seems when the Horses do, it costs them points.
Luckily for Devine, penalties have not cost them a ballgame up to this point.
However, as district season nears, Coach Gomez and his coaching troops are emphasizing the necessity to reduce the amount of times the yellow laundry is thrown onto the field. As each game passes, each game becomes more and more important about championship aspirations.
The team that commits the fewest penalties usually wins championships. That is straight up fact. With upcoming Luling the Horses last non-district opponent, now is the time to focus more on eliminating the silly and unnecessary penalties.
Sub-5A ranking
Devine held its grasp on the eighth spot in the SA-Express News weekly rankings. Poth takes the top spot this week, followed by La Vernia, Boerne, Comfort, Fredericksburg, Hondo, and Jourdanton. Devine remains at #8 followed by Cornerstone and Navarro.
Team stats
Total yards Dev 509 Ple 180 First downs Dev 26 Ple 9 Rushes-yards Dev 52-300 (5.8) Ple 17-72 (4.2) Passing yards Dev 209 Ple 108 Punts Dev 0 Ple 4 Fumbles-lost Dev 3-2 Ple 1-0 Penalties-yards Dev 14-110 Ple 8-57
Warhorse stats
Passing Brady Hackebeil 8-11-209, 2TDs; Jaiden Burford 0-1-0 Receiving Colin Dishman 2-71 (35.5); Mason Burford 4-53 (13.3), 1TD; Buddy Santos 1-52, 1 TD; Gabriel Esquibel 1-33 Rushing B. Santos 17-123 (7.2), 2TDs; Hackebeil 10-56 (5.6); Esquibel 6-43 (7.2); Nate Ramirez 6-29 (4.8); Hayden DuBose 3-28 (9.3); Marcus Rodriguez 2-12 (6.0); Ethan Santos 4-5 (1.3); J. Burford 3-5 (1.7); Aiden Zapata 1- -1.
Scoring summary
DEV—Brady Hackebeil to 21-yard pass to Mason Burford (PAT failed), 6-0, 9:25, 2nd.
DEV—Buddy Santos 1-yard run (Hackebeil two-point run), 14-0, 0:00, 2nd.
DEV—Hackebeil 52 yard-pass to B. Santos (Jacob Featherly PAT), 21-0, 8:44, 3rd.
PLE—Sean Ramos 49-yard run (Diego Luna PAT), 21-7, 7:59, 3rd.
DEV—Featherly 27-yard field goal, 24-7, 3:44, 3rd.
DEV—B. Santos 6-yard run (PAT failed), 9:53, 4th.
By Jerel Beaty
Staff Writer