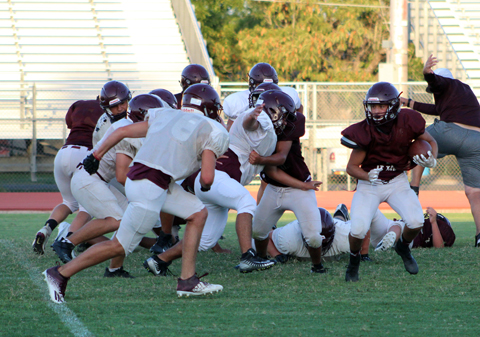 Yep, you read the headline correct. The Warhorses take on the Gonzales Apaches this Thursday at Warhorse stadium instead of its traditional, annual foe Navarro. No sooner did last week’s The Devine News hit the newsstand, Navarro temporarily postponed its football season due to positive COVID tests. This forced Warhorse head football coach Paul Gomez to find a replacement for Devine’s one and only live scrimmage of the season.
Fortunately, for Gomez and his Horses, Gonzales became available due to its scrimmage with Poteet also cancelled because of COVID in Aggieland. Hence, Devine vs Gonzales materialized and is what will now happen Thursday with the JV taking the field at 5:00pm and the varsity squad going at 6:15pm.
“Our real test comes Thursday with Gonzales,” Gomez stated. “They will have speed and size so it’s definitely something we need to see to prepare for Refugio and our other non-district games as well as our district games.”
Gonzales is coming off a successful 2019 campaign. The Apaches defeated RGC Grulla 48-27 in bi-district before losing the area game to Lampasas 56-6.
“We like to go against good programs to see where we stand getting ready for the season. That is why we have always scrimmaged Navarro and I think the same can be said about Gonzales. They are going to come ‘hit us in the mouth’ and I am anxious to see how we will respond to that. We look forward to Thursday at Warhorse Stadium,” regarding the importance of facing stiff competition.
Up next
Devine begins its 2020 season against Refugio at Warhorse Stadium while Gonzales also opens at home against El Campo, both on August 28.
By Jerel Beaty
Staff Writer