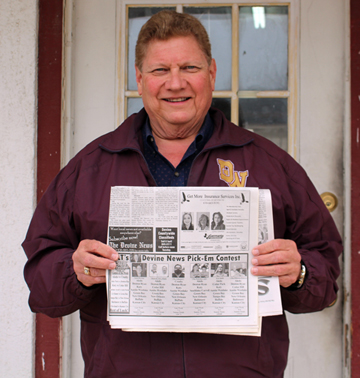 The Devine News would like to announce the winners of this year’s LT’s Pick Em’s Football Contest: 1st place Scott Herring, 2nd Midwest Pickers, and 3rd Retired Middle School Minds.
“This football season was a strange one due to the COVID-19 pandemic with many cancellations and rescheduling of games. Each week as I prepared the new schedule of games to choose from it changed several times before press time on Tuesdays. The first week alone I had to make 8 changes. But all in all it was a successful year and alot of people enjoyed the contest and throwing in their own thoughts of who would win the games. It was fun as always,” said Scott Herring.
Herring took over the coordination of the Pick Em’s contest 5 years ago after Devine News Sports Reporter Louis Travis passed away in March 2016. The Pick Em’s contest was one that Travis truly enjoyed and took great pride in. Herring had long been a picker prior to being the coordinator and has been just as devoted and diligent to pick a great line of games to include local games, area teams our local towns might face in the playoffs as well as some college and pro games. He even included games from Rockdale occasionally where Devine alumni Jacob Campsey was promoted to Athletic Director and Head Football Coach after their state title season in which he was the defensive coordinator.
Scott Herring was the #1 top picker choosing 152 winning games and 56 losses between the 208 games. He won by a margin of 8. The Midwest Pickers (Bob Fitzgerald & Mark Marcum) were 2nd place with 144-64. So close with only a one game difference was Third place winners “Retired” Middle School Minds (Richard Malone & Bill Herring) with 143-65. Also competing weekly were Eric Smith with a score of 142-66, “The Tailgater” Richard Ramirez with 134-74 and “The Waitress Crew”(Missy Cupp & Johnny Evans) and with 132-74.
The Devine News is fortunate to have volunteers like Herring who are willing to keep traditions like this alive and put in all the work that goes into coordinating such a big project each year for our loyal subscribers. And we are also fortunate to have volunteers (Richard, Bill, Richard, Missy, Johnny, Eric, Bob and Mark) who work diligently each week studying the games and trying to pick the winners.
“Thanks everyone for being a part of the STRANGE but SUCCESSFUL year. Until next year, STAY SAFE!
By Kathleen Calame
Publisher