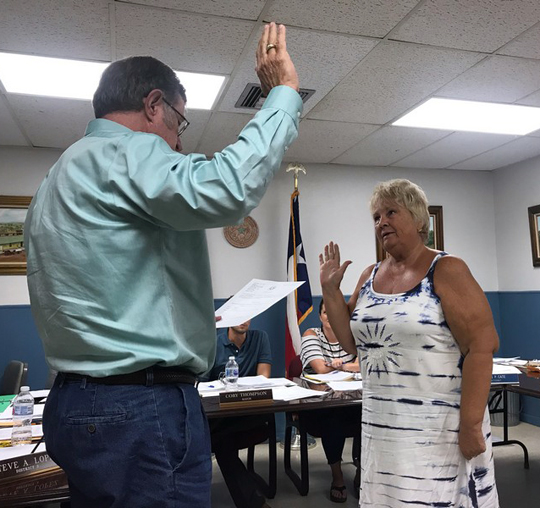 Debra Randall was appointed to the vacant District 5 position during the Regular Devine City Council meeting held last Tuesday, September 17.
“I’m extremely honored and hope that I can represent District 5 as well as my predecessor,” Randall said after the meeting.
The District 5 seat had been empty since July 19, when Cory Thompson was appointed mayor after Bill Herring resigned from that position.
Because both Randall and Cory Thompson were appointed to unexpired terms, both seats will be up for reelection in May 2020 and again in May 2021 in order to keep to the City’s regular two-year election cycle.
Prior to Randall’s appointment, several residents addressed Council about the seat’s vacancy.
“That seat needs to be filled without an election,” District 5 resident Odelia Gonzales said. “And you should appoint who you wanted to appoint, because yes, we need someone that’s fair-minded, that’s not just for their district, but for the whole community, for the whole citizens of Devine.”
District 3 resident Eva Thompson asked her Councilman, David Espinosa, why he was uncomfortable with the process the mayor used to select a recommendation.
Eva Thompson is Cory Thompson’s mother.

“Yes, we did give Cory that option, to make a recommendation,” Espinosa said. “Not an appointment. He made a recommendation, but then there was a question from the gentleman [George Valdemar] on the process. So whenever that came to my attention, it just brought up red flags.
“To me, honestly, I just want to be fair to every person that lives in District 5, to have the opportunity to say ‘consider me, too.'”
Cory Thompson initially recommended Randall for the District 5 seat at a Special meeting on August 27, after a vetting process that included a list of 13 questions. Both Randall and Valdemar returned completed questionnaires to Cory Thompson, who then scrubbed them of identifying language and distributed them to nine people involved with his initial election to Council in 2017. Those individuals favored Randall eight to one, and Cory Thompson ultimately gave her the nod.
Council unanimously postponed making a decision on Aug. 27 pending review of the completed questionnaires after Valdemar raised questions about the fairness of the process, and was postponed again on Sept. 10.
“Those people voted. Those people voted,” Eva Thompson said. “‘Which one do you like the best?’ And they voted, eight to one.”
Espinosa said he would have liked to see more than one person recommended.
“By bringing one recommendation to the table, to me, it seemed like it was already the appointment,” Espinosa said. “And that was Council’s job, to do the appointment.”
“He [Valdemar] got one vote,” Eva Thompson said. “I’m telling you, why [do] you think that y’all have the right to go against the rest of District 5?”
Valdemar, a recent transplant to Devine, said he had considered dropping his bid for consideration because of the focus on District 5 and the golf course.
“I’ve yet to hear about the schools, the crime, the streets, how do we revitalize downtown Devine,” Valdemar said. “Everybody’s consumed by District 5 and the golf course, and I put the accountability on the mayor and City Council.”
Valdemar said he wanted to know the vision for the City.
“How do we get our kids engaged? How do we get a co-op program going?” Valdemar said. “How do we enhance Devine to the next level?”
Randall, who has served on the Parks Advisory Board since its inception in August 2017, said she thought she could serve District 5 and the rest of the City well as a member of Council.
“I love this town,” Randall said. “I want to see it shine. I want to see it grow. I want to see things happen.”
District 2 resident Angela Pichardo, with whom Randall exchanged words during the Special meeting on Sept. 12, urged Council to appoint a representative who would be professional with everyone.
“I would hope that you would select someone who is here for the City, and for the community, whether you like me or not,” Pichardo said. “That doesn’t matter. Whether I like you or not, we can still have a civil discourse.”
District 5 resident Mary Herrera echoed that sentiment.
“I don’t know any of these people that are running, personally, but I do have to agree that for this position in the City, because the City is already in trouble, we do need respect and professionalism,” Herrera said. “And that’s all I’m going to say.”
District 5 resident Donna Trott encouraged Council to make an appointment at the meeting rather than call for a special election.
“I’m tired of not having somebody representing my district,” Trott said.
Espinosa said he objected to the process by which Randall was recommended, not with Randall as a candidate.
“It hasn’t been against anybody personally, especially [Randall], because I know that she can do it,” Espinosa said. “And of course, Mr. Valdemar, I just felt that he needed an equal opportunity.”
Espinosa then made a motion to appoint Randall to the District 5 seat, and received a second from District 4 Councilwoman Jennifer Schott. The motion carried, and Randall was sworn in by City Attorney Tom Cate.
The next Regular Council meeting is scheduled for October 15.
By Marly Davis
Staff Writer