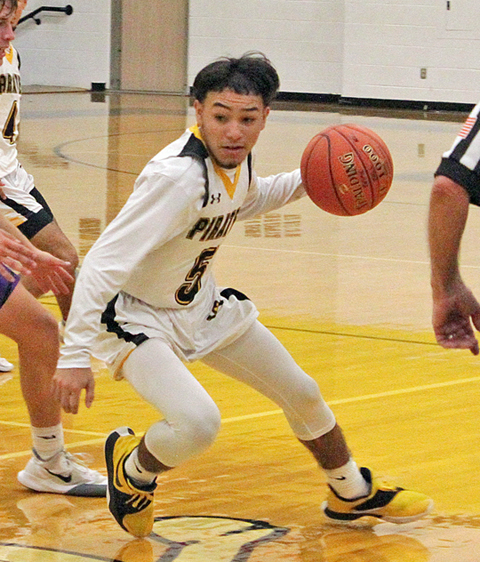 Over the holiday break the Varsity Pirates went 2-0, beating SA Memorial 83-49 and SA Fox Tech 82-72.
Sophomore Jordan Balderaz had his coming out party vs SA Memorial to let South Texas Basketball know that he would be a force to be reckoned with over the next few years by scoring 34 points, grabbing 16 rebounds, and 3 steals while sitting the entire 4th quarter cheering his teammates on. The rest of the Pirates played a solid defensive game with a season high 24 steals.
The following day the Pirates took on a ferocious Fox Tech team, the best team we’ve seen all year. The game was fast paced with each team pressing defensively most of the game, but the Pirates outscored and out lasted the Buffaloes 82-72. Jordan Balderaz had 20 points, but this game was led by an all-around effort from senior Mark Cantu. Mark had 13 points, 4 steals, 6 assist and was all over the Buffaloes defensively. Junior Jacob Ulrich coming to us from Gentofte, Denmark played his first week of UIL HS basketball. The kid scored 16 points while adding 4 rebounds, 3 assists, and 2 steals for a great overall game.
The boys will face Ingram HS this Friday in Ingram, TX. Our next home game is scheduled to be Dec. 15th against La Pryor. We are now 3-1!
Coach Jacob Hernandez