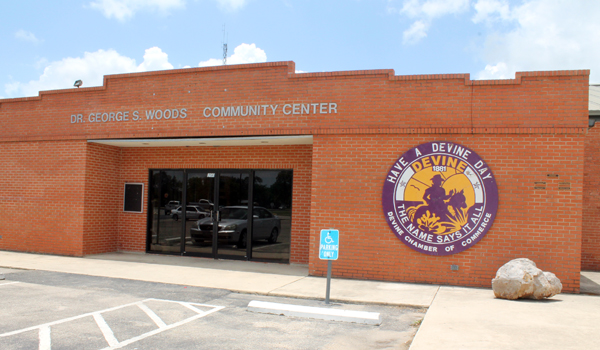 Voting in Devine will look different this year after the Devine City Council approved Medina County’s request to use the George S. Woods Community Center for both early and election day voting during the upcoming November elections.
The decision was made during the Regular Council meeting held last Tuesday, June 16.
Voting is usually held at the Precinct 4 annex building on Hwy. 132, but County Clerk Gina Champion said that court backlogs due to the ongoing COVID-19 pandemic posed a problem.

“[Justice of the Peace] courts, by law, have cases that need to be heard within a designated amount of time, so they cannot be postponed,” Champion said. “With the elections, we need to use half of the JP court space for early voting and election day. This makes it very difficult for both departments to do their job and maintain social distancing recommendations for everyone.”
Champion said that the presidential election would cause a larger turnout and likely force voters to wait outside or in their vehicles.
“I’m sure this might seem inconvenient to some and we do not want to discourage anyone from coming out to vote just because they may not be comfortable with the lack of social space available,” Champion said. “Conducting elections at the community center would be an excellent central location and easy for everyone to find. This will also allow more than enough ample space for the voters and poll workers while providing a comfortable distance for everyone while waiting to cast their vote.”
Tommy Ramirez, Pct. 4 Justice of the Peace, echoed Champion’s reasoning.
“This place has a lot more capacity and it would be a lot more convenient for the voters,” Ramirez said. “And in the middle of all this virus business…we can have a little more room here where we can social distance without too much trouble.”
The community center will host early voting from October 18-30, as well as Election Day voting on Tuesday, Nov. 3.
Mayor Cory Thompson pointed out that the City’s Fall Festival is held the first weekend in November and requires use of the community center and parking lot just days after Election Day.
Elections Administrator Lupe Torres said that community would be cleared in time for Fall Festival setup to begin.
“They come in the day before [Election Day], set up, and then at the end of the day, seven o’clock or whenever anybody has finished voting, they pack up everything and take it back to the office,” Torres said. “So I would say eight-thirty at the latest.”

A motion by District 2 Councilman Steve Lopez and District 3 Councilman David Espinosa to allow the County to hold the November 2020 elections in the community center passed unanimously with support from District 1 Councilman Rufino Vega, District 4 Councilman Chuck Guzman, and District 5 Councilwoman Debra Randall.
Council will revisit the county’s request to use the community center during future elections at a later date.
Voting for the primary runoff election scheduled for July 14 will still be held at the Pct. 4 annex building.
By Marly Davis
Staff Writer