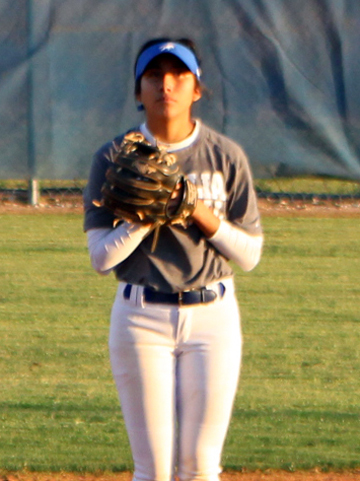 The Natalia Lady Mustangs were able to finish a three day competitive tournament in Seguin with three wins and three losses against plenty of stiff competition. During the weekend event, Natalia battled one 4A squad, three 5A squads and two 6A squads which will only prepare the girls in blue for 30-3A action when that time arrives.
5A Lockhart-Natalia opened the tournament last Thursday against the 5A Lockhart Lions. The girls in blue used an aggressive offensive and defensive approach to work past the Lions.
Natalia scored a pair of runs in their opening at bat thanks to singles by Taty Alvarado and Bivi Figueroa along with an error put into play by Trista Vera.
Two additional runs were scored in the 3rd inning courtesy of Trista Vera being hit by a pitch, a Bivi Figueroa single followed by a huge double by Mena Figueroa.
The final damage came in the bottom of the 4th inning. Natalia exploded for a five run inning, as the highlight of the event came with a two run home-run by Bivi Figueroa fueling Natalia to a 9-0 solid victory.
Natalia outhit Lockhart 10-4 during the game and forced two more defensive errors on the squad. Natalia had one defensive error.
At bat:Alvarado 2-3-2runs scored, Vera 0-1-3runs scored, B. Figueroa 3-3-2 runs scored, J. Figueroa 2-2, Abi Woodson 0-3, Marina Billalobos 1-2, KK Lara 2-2-1 run scored, Gabby Contreras 0-2 and Reagan Juarez 0-1-1 run scored.
Abi Woodson pitched 5.0, allowed four hits, 0 runs and struck out 6 while walking 0.
6A East Central- Natalia faced the Express News #5 area ranked East Central Lady Hornets (15-3-1) in the final game on Thursday. EC was able to score one run in both the 3rd and 4th inning before closing out Natalia with two runs in the 5th to win the non-district tourney battle 4-0.
East Central out-hit Natalia 6-3 and forced an error on the Natalia defense.
Natalia’s Alvarado, Vera and B. Figueroa accounted for hits for the girls in blue. Woodson pitched 5.0, allowed six hits, four runs (3 earned), struck out six and walked five allowing one home-run.
5A Kerrville Tivy-Natalia was able to rebound nicely on Friday, as they defeated the Kerrville Lady Antlers 3-2 in a tight contest.
Natalia jumped on the scoreboard in their opening at bat, as they used a Vera base on balls and a double by Bivi Figueroa to score.
The Lady Stangs added a second run in the 2nd inning, as Bryanna Perez single eventually scored thanks to two stolen bases and a Kerrville miscue.
Kerrville cut the lead in half in the bottom of the 2nd, thanks to a pair of singles before tying the game in the 4th thanks to a double and a single.
Natalia scored the winning run in the 5th, as Dezarae Perez walked before scoring on a Bivi Figueroa double.
The girls in blue were edged 5-4 in overall hits as the Natalia defense also had an error compared to none by the Hill Country squad.
Natalia’s Figueroa accounted for a pair of hits, as Alvarado and Perez had the other fire power offensively.
Woodson pitched 4.2, allowed five hits, two earned runs and struck out six.
6A John Madison-The final game Friday was vs 6A John Madison. Madison was able to work past Natalia out-hitting the girls in blue 10-3 en route to a 7-0 victory.
Natalia’s Vera, B. Figueroa and Lara accounted for hits for the girls in blue. Woodson pitched 5.0, allowed ten hits, seven earned runs, struck out ten and walked one giving up a pair of home-runs.
4A Boerne-The Express News #7 area ranked Boerne Lady Hounds (15-4) gave Natalia more fits than anyone has thus far this season. Boerne featured a much improved highly powered offense compared to years prior and dominated the girls in blue on both sides of the game.
Boerne out-hit Natalia 10-1 and forced four defensive errors on the girls in blue. As a result, the Kendal County squad handed Natalia a 9-0 shut-out.
Natalia’a Bivi Figueroa accounted for the lone hit. Woodson pitched 4.0, allowed ten hits, nine runs (6 earned), struck out three and walked one.
6A New Braunfels Canyon- The Express News 10th ranked squad was the final battle for the girls in blue. NB Canyon(10-7) of course, has been one of the best 6A squads in the area advancing to the state tournament the past two seasons.
Natalia was able to break open a scoreless event in the top of the 5th inning. Natalia used a Gabby Santoya base on balls, a stolen base and a two-out double by Bivi Figueroa to take the 1-0 lead.
The girls in blue did their final damage in the top of the 6th inning. Natalia used a Woodson base on balls, a stolen base, an error put into play by Lara along with a NB Canyon miscue defensive to score two runs to take a 3-0 lead.
NB Canyon scored their lone run in the bottom of the 6th, thanks to a a pair of errors and a single.
The Lady Mustangs finished the tournament out-hitting NB Canyon 3-1 despite giving up three defensive errors compared to two by NB Canyon.
Woodson had a very strong game, giving up the single hit to the traditional powerhouse, allowing one run which was not earned and struck out seven with only one walk.
Natalia’s B. Figueroa had two of the three hits as Alvarado had the third hit.
Upcoming Games
Natalia will get another shot at powerful Boerne on paper Wednesday with a 1:00 p.m. varsity battle on the road in Kendal County. The JV was scheduled for an 11:00 a.m. battle.
On Tuesday, March 17th Natalia will host the defending 1A State Champion D’Hanis Cowgirls at 6:30 p.m. The JV Lady Stangs will play host to Medina Valley at 5:00 p.m. prior.
By Eric Smith
Staff Writer