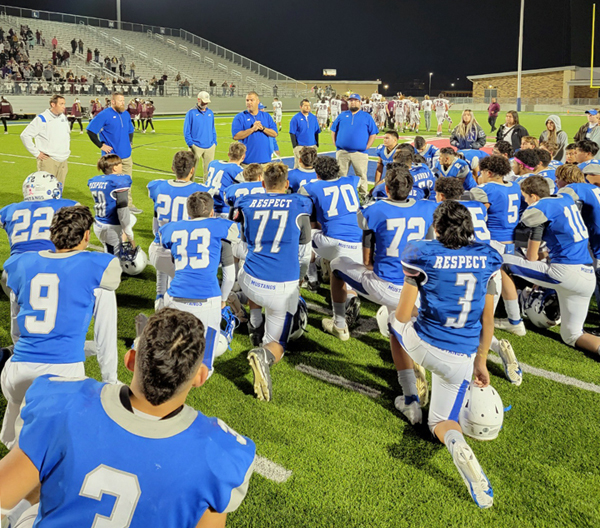 The Natalia Mustangs saw their season come to an end last Friday night in Pflugerville, Texas. The boys in blue used two Indian miscues, to take an 8-0 lead into the half before giving up ten straight points off two miscues in the second half of a defensive battle. Riesel will advance to the Semi-Finals to battle their district 14-3A (Div.II) Champion and #1 in the State of Texas, Franklin this week in the playoffs.
“Obviously, we are disappointed in the loss,” Natalia Athletic Director Ilyan Martinez said. “I felt like we were the better team and that’s what makes this loss even harder. We had our opportunities to win we just didn’t make the most of them. At this level in the game, when you make mistakes and don’t capitalize on your opportunities, those things are difference makers.”
The Riesel Indians were not your traditional 4th place team, as they had the best-looking front line of any team Natalia had played this season, along with a strong and sturdy QB Kyson Dieterich who stood at 6’5″ and around 230 lbs. Although this QB was not a speedster, he was a huge young man to contain and for the majority of the night, the boys in blue did a phenomenal job of holding him along with the entire Indian ball club to just 130 yards on the night.
Natalia was able to get on the board first in the 1st quarter, as Jordan Rosas bobbled a punt, rolled around and was under pressure. He fumbled the ball, as Elijah Banda picked the ball up and raced in from 21 yards out to score. The PAT was just wide, as the Stangs led 6-0 with 6:54 to go in the 1st quarter. This lead stood, until 1:25 to go in the 1st half.
With 1:25 to go, Natalia had Riesel pinned deep in their own territory at their own 10-yard line following a Jaiden Burford punt. On the 1st down play, QB Dieterich dropped back on a bad snap, grabbed the ball but was taken down by the Mustangs for a safety allowing Natalia to take an 8-0 lead which stood at the half.
At the half Natalia had accounted for 87 yards of offense and they had held the Indians to just 37 yards in the first half of this defensive battle.
To begin the second half, Riesel kicked a short pooch kick to the right side of the Natalia home sideline. It almost seemed slow motion, as everyone watched helplessly as the Natalia front line was unable to move quick enough to recover the kickoff. Riesel recovered at the Natalia 42-yard line and took over to start the second half.
The Indians made Natalia play, as they used five plays to march downfield before they stalled out at the 9-yard line of the Mustangs. Riesel was able to use a 26-yard field goal by Evan Hicks to get the Indians on the board.
On the ensuing drive, Natalia had their second straight turnover per se, as a Ryan Rizo pass on play #2 of the drive was intercepted by Santana Cisneros, the same Indian that recovered the kickoff. Riesel took over at the Natalia 16-yard line and used. The Indians used runs by QB Dieterich along with 6’0″ senior Dakota Davis to get down to the 2-yard line where they had 3rd and 2. QB Dieterich was able to break around the left side and score and following the PAT being good by Evan Hicks, the Riesel crowd was a tad rowdy as they had taken a 10-8 lead on Natalia.
The closest the Mustangs would get the remainder of the game, was down to the Riesel 24-yard line, but not an inch closer. The Indians were able to hold off the Mustangs in a tough 10-8 defensive battle loss in the Area Playoffs. This did mark the 4th time in five seasons Natalia had advanced to the playoffs and the third straight year to the Area Playoffs.
“I credit Coach Crowther and his staff as they made the plays on defense when they had to,” Martinez said. “Offensively, we couldn’t consistantly put together plays to create a positive drive.”
Offensive Struggles
The Mustangs struggled as mentioned offensively. Riesel had a huge line and didn’t allow much to go between the tackles and or around the outside last Friday night. The Tribe also kept pressure on QB Rizo as the Stangs did have a number of dropped passes and missed passes which could have been difference makers.
Natalia finished with 137 yards of offense on 52 plays including 68 rushing and 69 passing. Natalia was held to just seven first downs on the night and did have 2 turnovers in the game, both interceptions. Rizo finished 4-20-50-2INTs, as Jaiden Burford connected on a nice fake punt drawn up going 1-2-19 on the night.

QB Rizo led the rushing category with 14-39 as Adrian Vasquez had 6-23 and Luis Buentello 7-7. Receiving, Gabriel Perez had 2-41 and Burford 1-11.
Defensive Success
Normally when you hold a team to 10 points, you have to like your chances. Natalia did all they could defensively.
“Our defense has been outstanding all year and we knew when we started the season, they would be the strength of our team and that was evident Friday,” Martinez said. “They gave us every opportunity to be successful and we couldn’t make enough plays. We put them in bad situations and they responded over and over.”
Thank You Seniors
The Natalia Mustangs will say goodbye to the following 12 seniors: Adrian Vasquez, Nate Banda, Chris Saldana, Ryan Rizo, Gabriel Perez, Devin Perez, Roberto Hernandez, Manuel Garcia, Sean Sanchez, Gaylan Garcia, Xavier Laque and Rocky Cruz.
“This is another great class for us to come through our program,” Martinez said. “Like every class, they have their own legacy in our program. What we will miss from this class the most is the competitiveness they have brought to the program. One of the most competitive groups I have been around and that’s a big part of our success. We will also miss how they played the game with such ferocity and intensity. It made them fun to coach and watch.”
Final Thoughts
The Natalia Mustangs finished the season 8-4 overall and the 2nd seed in the district. This senior class also completed a sweep of rival Lytle and captured a number of big wins throughout their career including big one’s vs Randolph, Odem, Stockdale and others to name a few over the past four seasons.
“I am proud to see how far this program has come,” Martinez said. “We have been able to build something special and this group like the groups before played a role in building that championship program. I am happy to be a part of a program where our kids and coaches expect to compete for gold balls and make deep runs in the playoffs and they are upset when we don’t. We have come a long way and I am proud to be a part of something special. For every Mustang and Coach who has been a part of this journey with us, thank you,” Martinez said in closing.
Final #s
The Natalia Mustangs finished with impressive offensive numbers this season as well as defensive. Natalia out-scored their opponents 338-123 and out-gained their opponents with 215 1st downs compared to 127. Natalia gave up eight turnovers this season, while forcing 28 and out-gained their opponents on the ground 2,047-=1,243. When the Stangs passed, they out-threw their opponents 1,578-833 and ran 641 total plays compared to 549 out-gaining their opponents 5.7 yards a play compared to 3.8.n Natalia also averaged 302 yards of offense a game while only giving up 173 yards a game defensively.
Individual offensive stat leaders looked like this:
When Natalia ran the football, Adrian Vasquez finished with 89 attempts for 627 yards for 7.0 average with 5 TDs. Elijah Banda, finished with 93 carries for 519 yards for a 5.6 average with 6TDs. Luis Buentello was next with 65 carries for 329 yards for a 5.1 average with 3 touchdowns. QB Rizo finished 90-306 for a 3.4 average with 9 touchdowns. Rounding out the top five was Nate Banda, who finished with 3 carries for 187 yards for a 5.7 average for 1 touchdown.
Natalia’s Rizo finished the season 122-217-1,513 yards-20TDs-6INTs on the season for a 56.2%.
When Rizo threw, Gabriel Perez led receptions with 34-450-13.2 average with 5TDs. N. Banda was next with 17 receptions for 351-20.6 average and 9 touchdowns. David Silva finished with 24 receptions for 280 yards for an 11.7 average and 2 touchdowns. Manuel Garcia finished 13-168-12.9 average-1TD as A. Vasquez rounded out the top five with 9 catches for 111 yards with 2 touchdowns.
Looking ahead to next season
The Natalia roster will return plenty of familiar faces such as Elijah Banda, Luis Buentello and others, but will have to find a QB and a few linemen to make-up for a large senior class that we will be losing.
“I am proud of our players and coaches and what they were able to accomplish this season,” Martinez said. “NO one gave us a shot after we graduated last year’s class. To finish second and have the chance to advance to the third round was pretty special. We are excited to begin preparing for next season and we will go back to work.”
By Eric Smith
Staff Writer