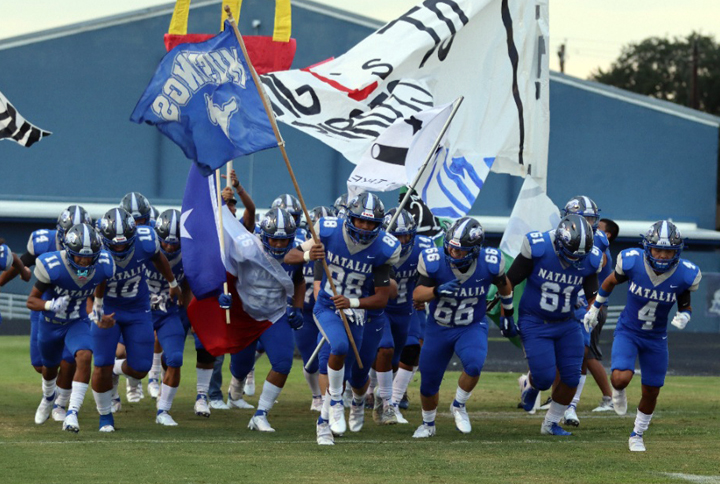 The Natalia Mustangs (5-2, 3-1) return to District 15-3A (Div.II) action this coming Friday night with a road game vs. the Karnes City Badgers (3-5, 2-2). After a two week halt in practice due to Covid issues within the team, the Stangs were back on the practice field this past Monday, October 26th as they continue their quest for a playoff spot and hopeful district title.
Covid Issues-There was a small out-break of Covid cases that hit the Natalia Mustang football program which resulted in a two week halt including the postponing of last week’s district battle vs. the Poth Pirates.
Every member of the Natalia Varsity team along with other selected individuals was quarantined for a specific time frame which did not allow them to practice or to attend on campus learning.
“We were excited to get our kids back and pick up where we left off,” Coach Ilyan Martinez said. “We had a great day of practice Monday and it was evident that everyone missed it.”

Karnes City Outlook
The KC Badgers are under the direction of new Head Coach Daniel Oelschlegel who took over for long time Head Coach Jim Wood who took on a separate district admin position at the end of last season.
Things got off to a rocky start for the black and orange, as they opened the season with a close hard fought loss to Marion 14-13 in the season opener. KC then dropped a 56-12 game to Woodville, a 68-7 game to #4 state ranked Poth before falling 31-20 vs. Odem.
KC then reeled off a 20-15 win over Dilley and a 32-6 win vs. Banquete before being blanked in one of two district games last week vs. George West 34-0. KC wrapped up their week Saturday night with a 21-15 road win over the Nixon-Smiley Mustangs.
“Karnes City is a lot better than their record shows,” Martinez said. “When we square off Friday night, this will be the first time we step onto a game field in two weeks. For KC, this will be their 3rd game in 12 days.”
The Karnes City Badgers will base their offense out of the spread formation.
“We will have to limit their big plays and slow down their passing game,” Martinez said. “They like to throw it around a bunch.”
Defensively, they will run an even front with a lot of man coverage.
“They have a very athletic secondary,” Martinez said of the KC defense.
According to Coach Martinez, the leader of the KC offense in his opinion is senior WR/DB Aaron Smith who wears #1. Defensively, he likes Sr Middle LB Kody Culpepper who wears #42.
KC Head Coach Oelschlegel was asked what appear to be his team’s strengths thus far as well as to identify some of the areas that have held his team back this season.

Natalia Outlook
The Mustangs of Natalia will continue their quest for not only a playoff spot, but a district title as they battle one of two final district contests.
“We will need to simplify some things to limit our kids from having to adjust,” Martinez said. “We need to utilize each day to get in shape and build back the continuity we had before we shut down,” Martinez added.
Natalia’s success on both sides of the football has begun with the performance of their offensive and defensive line. In the previous three weeks, the boys in blue were arguably out-sized, but definitely not out-played. This has been the base for Natalia’s success along with being the most physical team on the football field.
Offensively, Natalia has done a great job of utilizing their various offensive weapons during the previous three weeks which has limited one or two people for being responsible for the success and or failure on the field. It has been a true team effort which will be exactly what is needed again Friday night at Poss Johnson Field in KC.
Defensively, Natalia will not only need to be physical up front, but keep pressure on the KC QB who is not the most accurate thrower Natalia has been this season. KC does have a talented group of receivers which will provide a good challenge for the secondary as the big Poth game looms.
Game time is set
The kick-off is set for 7:30 p.m. for the square down in KC between the Mustangs and the Badgers. Tickets are on sale on Ticket Spicket with an access code as follows: NKZ997.
Be sure to make the trip over the Badger Country to cheer on the boys in blue as they look to clinch a playoff spot and continue their quest toward a district title!
The final district 15-3A (Div.II) game will be next Friday as the Stangs welcome the #4 State Ranked Poth Pirates to town.
By Eric Smith
Staff Writer