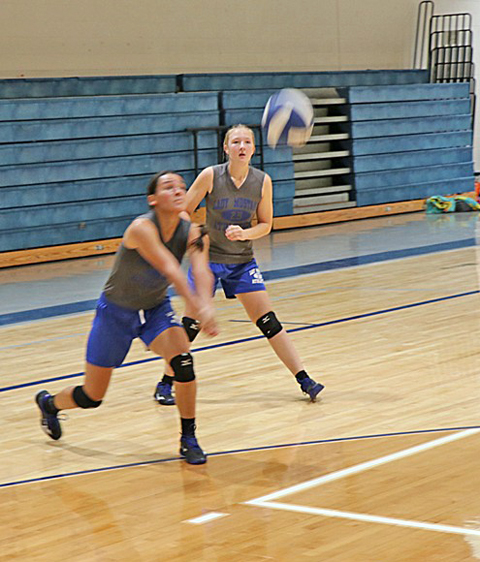 Over the weekend, the Varsity Lady Mustangs competed in the Three Rivers tournament and came home with a 1-4 record. This was their second tournament and with it still being early in the season, the Lady Mustangs are working hard to get ready for district.
Coach Tamara Bednorz’s team faced Banquete and it was not a great opening to the tournament with 11-25 and 15-25 losses. Digs: Bryanna Perez 4, Christina Fulton 4. Kills: Angelica Padilla 2. Assists: Bailey Boucher 4.
Their second game on Friday was against Yorktown and was another tough defeat at 15-25 and 15-25. Digs: Padilla 5, Perez 5, Fulton 4. Kills: Padilla 5. Assists: Boucher 3.
Saturday morning started off better against Cotulla but was still a loss. They won their first set but Cotulla woke up and took the second two sets quickly. 25-12, 11-25, 9-25 Digs: Angelina Zapata 10, Hailey Manka 9. Kills: Padilla 7, Perez 4. Assists: Boucher 5.
Beating the home team in their own tournament is always a big win. Natalia beat Three Rivers 25-14 and 25-17. The Lady Mustangs were playing well as a team and worked hard for every point. Digs: Padilla 8, Corona 4, and Zapata 4. Aces: Manka 3 and Zapata 3. Kills: Padilla 5 and Joseph 3. Assists: Boucher 1.
The final game of the tournament was against Poteet and it was close both sets but Poteet won. The Lady Mustangs ended their final game 19-25 and 20-25. Digs: Corona-6, Zapata-5. Blocks: Padilla 1 and Corona 1. Kills: Vera 2 and Corona 2.
“We got better every game. We are focused on small victories/wins like less than 5 free balls, 90% serving, passing no less than a 1.6. As we focus on the small win, we know the big victories will come.” Coach Bednorz
Natalia will compete in the Taft tournament this weekend and then play at home against Marion on August 27th.
By Dicy Chambers
Sports Writer