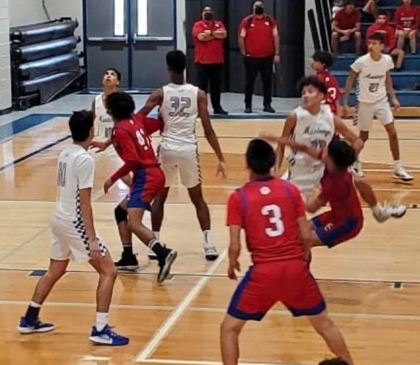 The Mustangs are a few games deep into district and are now 1-4 after beating West Campus last week. Last night they took on Karnes City and this Friday is a bye. On January 11 they will head to Jourdanton and then be at home Friday to face Poteet.
Facing Dilley on December 28th, Natalia fought hard “and did a good job of fighting from 15 down early in the second quarter and cutting the lead to 7 going into halftime. They played well for most of the 3rd quarter but Dilley was able to stretch their lead to 9 as they outscored us 12-10 in the 3rd quarter. In the 4th quarter, we struggled to score, and Dilley was able to pull away and win by a score of 55-42. We have to do a better job of playing a full 32 minutes of basketball. A five-minute stretch at the end of the 1st and beginning of the 2nd quarter was the difference in this game. We had a few turnovers and Dilley was able to take advantage of those opportunities,” said Coach Justin Welsh.
Stats: Paul Zapata sank a 3-pointer, David Silva one 3-pointer, Devin Chapa a 3-pointer, David Rodriguez 4, Josh San Miguel 24, and Matt Martin 2 points. Q1 12-23, Q2 24-31, Q3
34-43, Q4 42-55.

Starting off slow with West Campus, Natalia was aggressive on offense, but their shots would not fall in. “West Campus did a good job of taking advantage of those opportunities and scored some transition buckets and hit some big shots. At one point in the early 3rd quarter, we fell behind by a score of 33-13 but the guys would not quit. They increased their level of intensity on the defensive end of the floor and got some easy buckets and just chipped away at the lead. We went into the 4th quarter down by a score of 40-38 and it wasn’t long before we were able to take the lead. We would outscore West Campus 50-22 in the 2nd half to take a 63-52 victory and pick up our 1st district win of the season. It would have been real easy for our guys to quit after being down 17 at halftime, but we made some adjustments at halftime and they came out and executed in the 2nd half to pick up a nice come-from-behind win,” reported Coach Welsh.
Justin San Miguel had a double-double with 21 points, 14 rebounds, 3 assists, 2 steals, and 2 blocks. Zapata had 1 steal. Silva had 7 points, 6 rebounds, 5 steals, 1 block. Chapa scored 4 points. Elias DeLuna had 13 points, 2 rebounds, 2 steals. Justin Curiel-2 points, 2 rebounds, 1 block. Rodriguez-2 points, 2 rebounds, 3 assists, 2 steals. Joseph Gonzales- 3 points, 1 assist, 2 steals, 2 blocks. Martin- 2 rebounds, 1 block. Manuel Garcia- 8 points, 9 rebounds, 2 steals. Q1 6-16, Q2 13-30, Q3 38-40, Q4 63-52. FTP 47%.
“Natalia is coming together as a team and they are ready to improve their standings in the district. It will be tough but if they continue to work hard, they certainly have a shot.”
By Dicy Chambers
Sports Writer