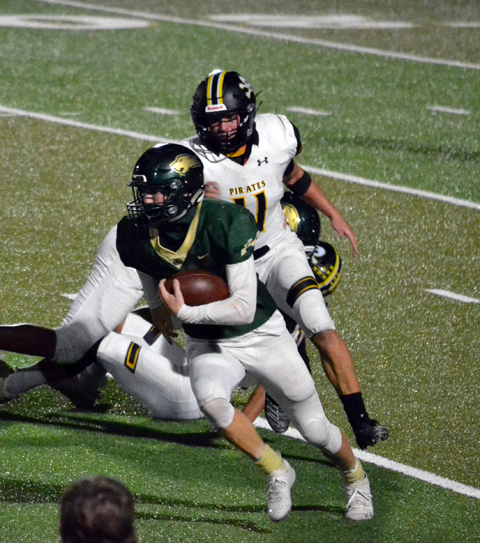 The Lytle Pirates spoiled another team’s homecoming Thursday night with a 30-28 victory over the Cole Cougars. The game came down to the last two seconds becoming the third game in a row that had the Pirate faithful on their feet.
Cole executed and recovered an on-sides kick to start the game. The Cougars drove deep into Pirate territory until the Lytle defense rose up and stopped them. Cole settled for a field goal for the first score of the game at the 8:05 mark of the first quarter.
Lytle could not move the ball on their first possession and settled for a punt giving Cole a 1st & 10 at their own 35-yard line. The Pirate defense stopped Cole when Pirate Cort Haltom recovered a Cougar fumble at the Pirate 48-yard line.
Malakai Castro ripped off a 52-yard run to the Cole 5-yard line. Justin DeLeon scored on a 5-yard run to get the Pirates on the score board. The PAT by Daniel Aguirre was successful bringing the score at the 1:26 mark to Pirates 7, Cougars 3. Cole could not mount any progress and the first quarter ended with the Pirates leading the Cougars.

On Lytle’s next offensive possession runs by Carson Aldridge, Malakai Castro, Mark Cantu and the passing of Carson Aldridge resulted in another touchdown. Aldridge completed a 29-yard pass to Zakry Placido, a 5-yard pass to Logan Wilson, and a final 5-yard touchdown pass to Wilson. The PAT by Aguirre was good to bring the score to 14-3 in favor of the Pirates with 5:54 remaining in the first half.
The Lytle defense will force another Cole punt giving the Pirates another chance to score. Strong runs by the Lytle ball carriers will be finished by a 22-yard touchdown run by Mark Cantu. Aguirre’s kick was good bring the score to Lytle 21, Cole 3 with 1:12 remaining in the first half.
Just when the Pirate fans were expecting a rout, Cole completed a 40-yard pass to set up a short touchdown pass to cut the Pirates lead. Cole’s PAT was good ending the first half with Lytle leading 21-10.
Lytle kicked off to start the second half. Cole completed another 40-yard pass deep into Pirate territory. Carson Aldridge made a touchdown saving tackle, however this tackle resulted in a serious injury. Cole scored on a 7-yard pass to tighten the score. The PAT was good bringing the score to 21-17 with 8:04 in the third quarter.
Quarterback, Carson Aldridge was replaced by his brother Collin and teammate Mark Cantu. Neither could manufacture a Lytle drive forcing a Pirate punt. Cole drove deep into Lytle territory until stopped on the Lytle 37-yard line. Cole tried a trick play on fourth down, but Pirate Deven Caldera sacked the Cole runner for a ten-yard loss. Neither team advanced the ball and the third quarter ended with the score Lytle 21, Cole 17.
Lytle stopped Cole’s drive early in the fourth quarter and started a drive of their own. Daniel Aguirre took off on a 35-yard run to the Cougar’s 20-yard line. Mark Cantu picked up a 1st and 10 on the Cole 8-yard line. Cantu carried to the 1-yard line and then scored on a 1-yard run. Aguirre’s PAT was good bringing the score to Lytle 28, Cole 17 with 7:59 remaining in the game.
On their next possession Cole drove deep into Pirate territory aided by a Pirate roughing the passer penalty. A penalty for a late hit out of bounds against Lytle followed. Once again, the Pirate defense stiffened to force a fourth down field goal. The kick was judged to be good bringing the score to Pirates 28, Cole 20 with 4:11 remaining in the game.
Cole recovered their second on-side kick on the Pirate 32-yard line to really make the game exciting. The Pirates appeared to recover a Cougar fumble, but it was ruled an incomplete pass. The Pirate defense forced a 4th & 10 deep into Pirate territory. Under pressure by Pirate Rylan Wagner, the Cole quarterback completed a pass near the first down marker, but Pirate Collin Aldridge stopped the receiver two yards short of the first down marker with 1:41 remaining in the game. Runs by Vincent Casanova and Mark Cantu resulted in a 4th & 1 with 2 seconds remaining. Cantu took the snap and ran around in the backfield until the clock reached 0.00. Lytle won their third game in a row with this 28-20 victory.
Carson Aldridge was the leading passer of the game. Mark Cantu, Carson Aldridge, Justin DeLeon, Malakai Castro, Daniel Aguirre, and Vincent Casanova powered the running game. Leading receivers were Zakry Placido and Logan Wilson. The offensive line was great, especially during the first half and fourth quarter.

The Pirate defense was led by leading tacklers Rylan Wagner, Cort Haltom, and Collin Aldridge. Wagner had an 8-yard sack of the quarterback. Haltom recovered a Cougar fumble to stop a Cole drive. Deven Caldera tackled a Cole runner for an 8-yard loss near the end of the second quarter. The front line of the Pirate defense led by Kody Villarreal, Roberson Harold, James Black, Diego Garcia Hernandez, Brenham Sevier, Kasen Boyd, Cort Haltom and Jonathon Cantu played a great game, especially when the game was close in the fourth quarter.
Lytle will play their next game Tuesday night, October 27th, hosting the Jourdanton Indians at 7:00 p.m. The result of this game will be too late to meet press deadlines. I hope to see the Pirate faithful Tuesday night.
By Bill Herring