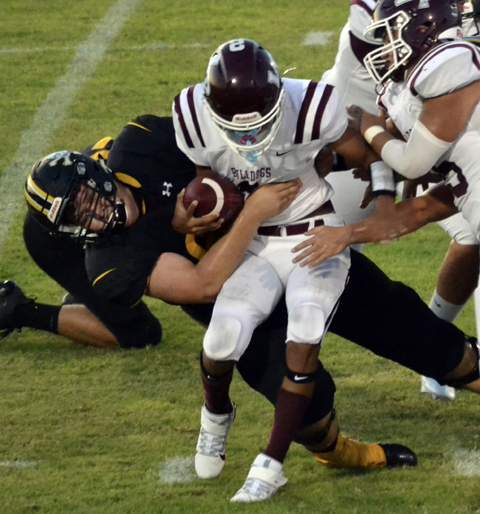 The Lytle Pirates scored quickly and often to defeat the La Pryor Bulldogs Friday night in their first home game of the 2020 season. Lytle’s defensive line came out strong, with Kody Villarreal making the first stop of the game. Lytle scored early in the first quarter thanks to a Bulldog gamble that failed. On fourth and long La Pryor ran a sweep toward the Lytle left side of the line, but Vincent Casanova tackled the runner for no gain and the Pirates took over at the 14-yard line. Lytle scored quickly on a 14-yard run by Justin DeLeon. The PAT by Daniel Aguirre was good giving the Pirates a 7-0 early lead.

Lytle would score three more touchdowns in the first quarter. First, Quarterback Carson Aldridge ran 54-yards for another Pirate touchdown. The PAT was unsuccessful and the score remained 13-0 Lytle. After a pass interception by Bubba Solis, Aldridge hooked up with Zakry Placido for a 38-yard touchdown pass. The PAT was good bring the score to 20-0 at the end of the first quarter.
In the second quarter, Malakai Castro returned an intercepted pass 80 yards for a touchdown. Once again, Aguirre was successful on the PAT giving Lytle a 34-0 lead at the end of the first half.
After a great halftime performance by the Lytle marching band, Mark Cantu would return the second-half kickoff 78 yards for a touchdown. The PAT was good giving Lytle a 41-0 lead. Later in the third quarter an interception and 30-yard return by Devin Caldera set up a 1-yard touchdown run by Vincent Casanova. The PAT was good bringing the score to 48-0. Late in the third quarter Caldera would force a Bulldog fumble which lead to a 40-yard return by Brandon Adkins. The third quarter would expire with the score of Lytle 48, La Pryor 0.
Lytle began the last quarter on a 5-yard touchdown run by quarterback, Bubba Solis. The PAT was wide left leaving the score 54-0. Lytle closed out their scoring on a 20-yard touchdown run by Vincent Casanova. The PAT by Jason Vega was good bringing the score to 61-0. Later in the quarter La Pryor would get on the scoreboard with a 27-yard touchdown pass. The PAT failed leaving the final score Lytle 61, La Pryor 6.
The offensive outburst was due to the outstanding blocking of the interior offensive line and the down field blocks of the wide receivers. Carson Aldridge led the offense in passing yards with Zakry Placido the leading receiver for the Pirates. Vincent Casanova and Aldridge were the leading rushers. Mark Cantu led in kick returns.
On the defensive side, Albert Aguilar and Cort Haltom led in tackles. Haltom accounted for 2 tackles for loss. Throughout the game Haltom also pressured the Bulldog QB which led to constant incompletions and interceptions for La Pryor. Bubba Solis broke up one pass along with his interception. Zakry Placido broke up one pass while teammate Malakai Castro broke up one pass along with his interception. Devin Caldera caused a fumble with led to a long fumble return by Brandon Adkins.
All in all, it was a great night for the Pirates! Lytle will host the Luling Eagles Friday night, September 18th at Walter Joyce Stadium. Kick-off is at 7:30 p.m. I hope to see all you Pirate fans there!
By Bill Herring