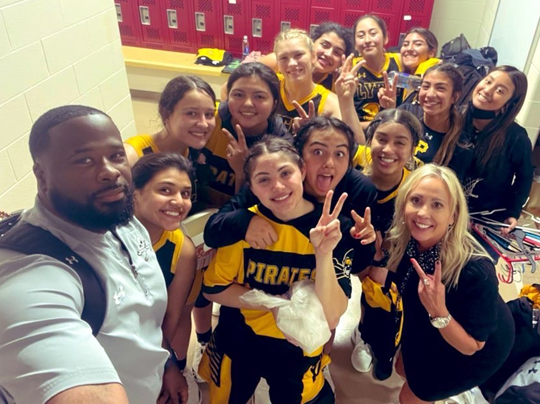 Another impressive week is in the books for the Lady Pirates. On Tuesday they took down Devine and then headed to the Southside Tournament where they were the only 3A school amongst larger schools. Their size did not stop them as they brought home 2nd.
Tuesday night, the Lady Pirates headed to Devine and held them to a single free throw in the first quarter. “The second quarter we got a little too excited and made some turnovers and let Devine score 17 points. We went into halftime up 32-18. This was a physical game and both teams were going at it hitting the floor and taking hard fouls. We always say if we can take the 3rd quarter we can win because we can then control the 4th with our tempo. We came out the 3rd and won the battle 10-7. Beginning the 4th Lytle was up 42-25 and we continued to keep the lead down to the buzzard. Everyone contributed big minutes in this great TEAM win. I am so proud of all the girls. The subbing is working when we need it and the bench is really stepping up. If we want to make the post season that is what we will need,” said Coach Lori Wilson.
In the Devine game, “Calyssa Sevier suffered some hits and has an ugly looking elbow but she came through with 21 points, 2 rebounds, 4 assists, 8 deflections, 4 steals. Sevier has now scored 620 points! Fizz Hutton had the game I have been waiting for her first double-double with 19 points, 12 rebounds, 3 assists, 3 deflections, 4 steals, and 1 block. Cadee Martinez had 10 points, 4 rebounds, 6 deflections, and 2 steals. Eisabel Guerrero had 3 points and 4 steals. Katara Whitfield played her best game being the aggressive player I like seeing her be, she had 2 points, 5 rebounds, and 1 assist. Nicole Godines 2 points, 2 rebounds, 2 deflections, and 4 steals. Sofia Hutton played great off the bench making Devine change their shot with her being big in the paint. She had 2 points, 2 rebounds, 1 deflection, 1 steal, and 1 block. Amelia Martinez is one of those quiet players but gets the job done. She has been great for the team being the first guard off the bench. She had 1 rebound 1 assist 1 deflection 1 steal. Arianna Garcia is fitting into her role helping us under the basket. She had 1 rebound and 1 deflection. Rose Scotello is coming along, this is her first year of basketball and she is growing each day. She had 2 rebounds and 1 steal,” reported Coach Wilson.
The Lady Pirates proved themselves once again in the Southside Tournament. Playing with much larger schools, Lytle did not let size stop them, they went 4-5 in the tournament and found themselves in the championship game against Harlandale. Lytle fell 52-60 but earned 2nd in the tournament. Junior Cadee Martinez and Sophomore Calyssa Seiver were named to the All-tournament team and Seiver had a season high of 42 points against Harlandale.
Seiver was also awarded the San Antonio Express News game ball for her outstanding performance in the Southside Tournament. She scored a total of 157 points in the tournament including the 42 against Harlandale.
“We played well these girls are coming together as a team!! We went 4-5 in the tourney and overall 6-2,” added Coach Wilson.
Up next for the Lady Pirates is Hondo on November 30th, the Navarro tournament December 2-4th, and then West Campos on December 7th. District starts December 17th in Lytle against Jourdanton.
By Dicy Chambers
Sports Writer