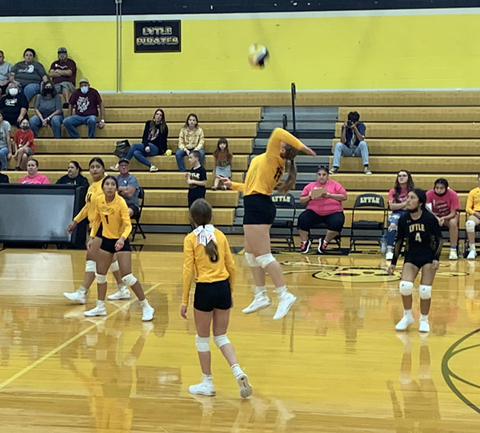 The Lady Pirates had a rough time last week when they fell to Jourdanton and Dilley. They are now 4-10 for the season and have two games left after facing Natalia last night. This Friday they will play at West Campos and then finish their season at home against Cotulla. Currently Poth leads the district undefeated.
Tuesday night in Jourdanton, the Lady Pirates “came out determined to compete against the Squaws. The Pirates struggled with serve-receive the entire evening. There was a moment when the Pirates had a good rally and were able to control the game but we couldn’t hang-on to that momentum. The team is adjusting and working well with two new players to the squad, to help with the loss of two key players who are out due to knee injury. Our Pirates lost to Jourdanton in three sets 9-25, 11-24, and 14-25,” said Coach Denise Cordero.
Pirate of the Game: Rose Scotello: 1 ace, 1 kill, 3 assist, 6 digs. Player Stats: Marissa Lopez: 1 ace, 1 block, 4 digs. Amelia Martinez: 1 dig. Alyssa Sprenger: 1 kill, 1 dig. Lola Patino: 1 assist, 17 digs. Kaylee Diaz: 2 kills, 3 digs. Arianna Garcia: 3 kills, 2 digs. Chelsea Gonzalez: 3 aces, 3 kills, 3 digs. Skye Granato: 2 kills, 1 dig.
Facing Dilley in Lytle, the Pirates played a good game against the Wolves. “The Pirates started the set with some receiving errors but were able to clean it up. Unfortunately we could not take this set and lost 15-25. The next two sets our Pirates played with more determination and made the game exciting. The Pirates had some great saves, passes, sets, and kills that had the crowd at the edge of their seats. The Pirates lost to the Wolves in three sets 15-25, 23-25, 27-29. I am proud of these young ladies, they have displayed a lot of determination and have had to deal with some adversities but they are still here and giving their all. We are extremely grateful for the dedication to themselves, their teammates and coaches, and to the program,” added Coach Cordero.
Pirate of the Game: #6 Kaylee Diaz: 2 aces, 3 kills, 1 assist, 3 digs. Player Stats: Lopez: 7 assists, 10 digs. Martinez: 4 digs. Sprenger: 2 kills, and 6 digs. Patino: 1 kills, 7 digs. Montalvo: 1 ace, 1 dig. Scotello: 1 ace, 9 kills, 1 assist, 11 digs. Garcia: 2 digs. Gonzalez: 1 ace, 3 kills, 1 block, 1 assist, 11 digs. Granato: 2 aces, 1 kill, 1 assist.
By Dicy Chambers
Sports Writer