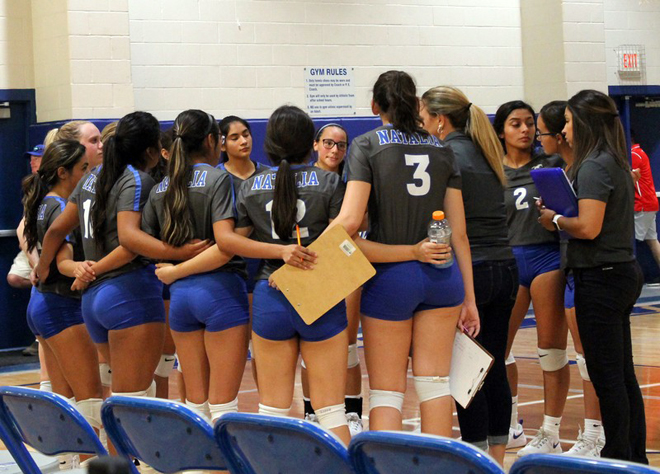 It was a rough week for the Lady Mustangs. They lost to Jourdanton on Tuesday and Dilley on Friday but despite the scores not in their favor, the Lady Mustangs fought hard against tough teams.
The Lady Mustangs may have lost to Jourdanton, but they made the Squaws work harder than they expected to. Natalia pushed the first two sets to 21-25 each and then they dropped the third set 14-25.
Stat Leaders: Kills Trista Vera 3, Angelica Padilla 3. Digs Bailey Boucher 8, Bryanna Perez 6. Assists Boucher 4, Perez 2.
When the Lady Mustangs faced Dilley on October 18th, they were ready to fight and came out to win the first set 25-18. They continued to fight in the second but fell two points short at 23-25. In the third and fourth sets, the Lady Mustangs could not keep the ball in play on their side and dropped the last two sets 12-25 and 16-25.
Stat Leaders: Kills A. Padilla 7, Katelyn Corona 6. Aces A. Padilla 1, Hailey Manka 1, Angelina Zapata 1. Digs Manka 11, Bryanna Perez 10, Zapata 10. Assists Boucher 4, Perez 4.
Dilley and Jourdanton are tied for first at 5-1. Cotulla sits at 3-4 and Natalia is 1-5 in district. Lytle and Laredo fill in the gaps. Natalia will face Laredo on Friday and Lytle Tuesday in their final two district games.
By Dicy Chambers
Sports Writer