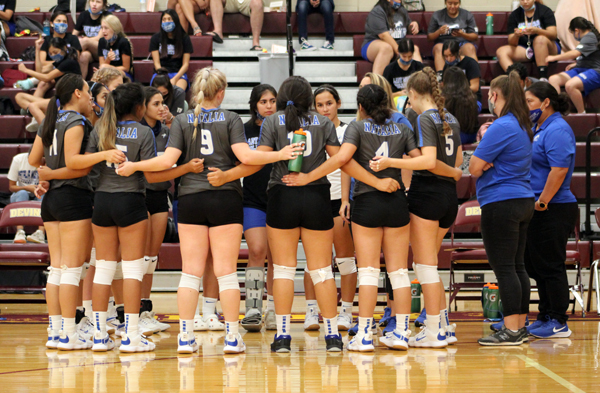 The Lady Mustangs had a rough week after falling to D’Hanis and Carrizo Springs. They are 3-5 heading into district and had their first district game against Poteet last night. D’Hanis is always a tough school to face and without any spectators, Natalia could not get into the game and fell 6-25, 23-25, and 21-25.
Aces: Angelica Padilla, 2, Bailey Boucher 2, Trista Boucher 2. Kills Padilla 3, B. Boucher 2, T. Boucher 2, MaAiyla Ruiz 2. Assists: B. Boucher 5. Digs: Tina Fulton 5. Blocks: Reina Vera 3, Kylee Spangler 1. Block Assists: Spangler 3.
When they faced Carrizo Springs on Friday night, the Lady Mustangs had more fire under them. They dropped the first set 16-25 but came back to win set two at 25-23 and set three at 25-9. They nearly won set four but lost it last minute at 22-25 and the fifth set 13-15. They played hard and went after every ball. They made Carrizo Springs work harder that expected for the win.
Kills: Padilla 10, Vera 6. Aces: Vera 3. Assists: B. Boucher 4. Digs: Fulton 6, Perez 7.
The Lady Mustangs will play in Jourdanton this Saturday and in Poth Tuesday.
By Dicy Chambers
Sports Writer