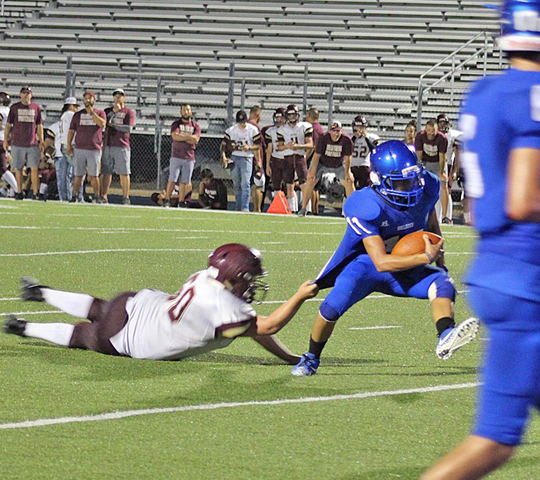 Christmas came early for the JV football Warhorses last Thursday evening in Somerset. Devine capitalized on three Bulldog turnovers to cruise to a 30-6 victory that improves their record to 2-0 on the young season.
Robert Ramirez recovered a Somerset fumble at the Devine 45. That recovery led to a 14-yard touchdown run by halfback Hayden DuBose. DuBose added the two-point conversion as well to put the Horses up 8-0 early in the game.
On Somerset’s next offensive possession, Outlaw Walker jumped on a loose ball to give Devine the ball back at their own 32-yard line. On the first play of the second quarter, DuBose took the pitch from quarterback Cody Trammal to scamper 32-yards into the end zone. Trammal hit receiver Mason Martinez for the two-point conversion to put Devine up 16-0.
DuBose, who finished with four touchdowns, added an interception midway through the second quarter. He picked off a deep pass at the Warhorse 35 and returned it all the way to the Bulldog 42. Good runs by Sage Cruz and Gus Puente set up DuBose’s third touchdown from 1-yard out. Devine led 22-0 going into halftime.
A long kickoff return by Devine’s Sage Cruz to open the second half put the Horses in great field position at the Somerset 42-yard line. DuBose put the finishing touches on a great ballgame by breaking several tackles in the process to score the Horses last touchdown. Puente added the two-point run giving Devine a 30-0 lead.
Somerset scored late in the game on a 6-yard run to make the final score Devine 30 and Somerset 6.
Up next
The JV is back in action Thursday, September 12 at Warhorse Stadium against San Antonio Legacy. Kickoff is set for 6:45pm.
By Jerel Beaty
Staff Writer