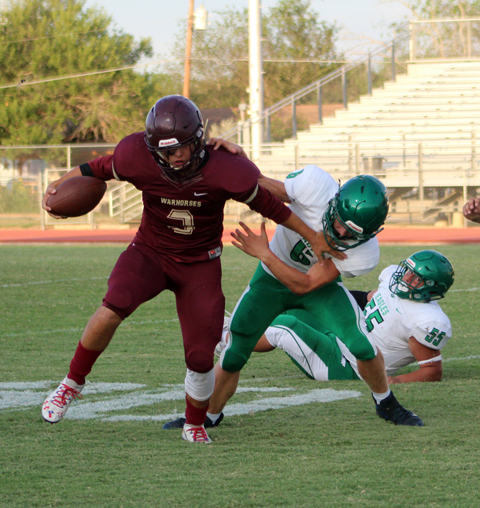 The Devine JV Horses defeated the Pleasanton Eagles 36-20 at Warhorse Stadium last Thursday thanks in large part to a dominating second half. With the score tied at 14 apiece at the halftime break, Devine scored three second half touchdowns to snag the victory and improve their record to 4-0 on the season.
“We were back and forth in the first half as far as scoring for each team, but our offensive line came out to play in the second half and dominated the line of scrimmage,” said an exuberant Coach Heath Poppe. “You can add fullback Jose Moralez to the top of the list as well due to his outstanding blocking from his backfield position.”
In Devine’s offense, not only are the five down offensive linemen heavily relied upon to block their defensive counterpart but more than not the fullback, tight ends, and, yes, even the quarterback are asked to block in this run-dominated offensive scheme.
“Again, our fullback does not get a whole lotta love sometimes in the ball carrying department so I wanted to mention that Jose did a tremendous job blocking. The importance of what he is asked to do cannot be overlooked. The same can be said for our quarterback Jonathon Weinkam. In our system, the QB is sometimes a glorified offensive guard and Jonathon did a great job as well.”
Scoring recap
Eli Contreras seems to find the end zone multiple times each game this season. Against Pleasanton, he scored two more touchdowns including the first score of the game on a 9-yard run. The two-point run by Wero Torres provided Devine a first quarter 8-0 lead with 4:45 on the clock.
Pleasanton bounced back quickly however as they hit the end zone 47-seconds later with a 47-yard run. Their conversion attempt failed so Devine still led 8-6.
With 8:22 to go in the second quarter, Contreras popped in from 2-yards out to increase the Horses lead to 14-6 as the two-point conversion failed.
The Eagles scored before the halftime break to knot things up at 14.
Warhorse running back Evan Sanchez broke loose for a 37-yard touchdown run with 6:16 to go in the third quarter. Torres added his second conversion of the ballgame, boosting Devine’s lead to 22-14.
Torres decided to get in the six-point scoring category with a two-yard touchdown run of his own just as the final quarter was beginning. Sanchez returned the two-point favor to Torres as he converted the two-point run. This Warhorse score was set up by a three-and-out provided by Devine’s staunch defense and increased their advantage to 30-14.
Pleasanton tried to fight back, scoring with 6:18 to go in the game on a 4-yard run to pull within striking distance at 30-20.
Quarterback Jonathon Weinken put the nail in the coffin with a 2-yard scoring run with only 2:28 to go. That was the last touchdown scored by either team in Devine’s 36-20 victory.
Devine’s defense was able to shut down the Eagle offense for pretty much the entire second half, allowing the Warhorse offense some breathing room to begin its drives.
“Our JV defense did an outstanding job Thursday,” said Coach Evan Eads. “They were on top of their reads across all positions and they are tackling better every week. It was a game they really wanted to win. The coaches are very proud of their effort.”
Up next
The Horses travel to Luling Thursday for a 6 pm kickoff against another Eagle team.
By Jerel Beaty
Staff Writer