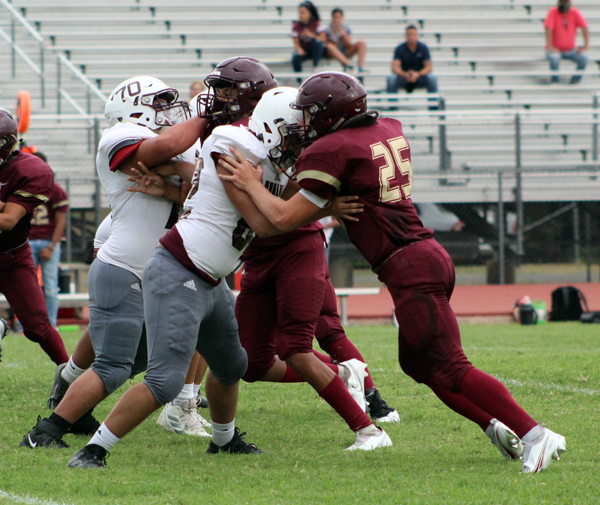 The JV Warhorses defeated visiting Uvalde 29-0 last Thursday to improve their record to 1-1 on the young season. Two rushing touchdowns by Elijah Sanchez in the first half gave the Horses a 16-0 advantage midway through the game. Blain Davis and Ignacio Cisneros hit pay dirt in the second half to secure Devine’s first win of the season.
A steady ground game led by Gus Puente and Sanchez kept the ball in the Warhorse’s possession for big chunks of the game. Even though Uvalde boasts talent of their own, those skills were no match for Devine in this particular game.
“Offensively, we wanted to manage the clock to keep their offense off the field. We did that. The offensive line did a great job making running lanes for our backs and our backs found those holes throughout the game. There were a few times holes were there and we missed them, but as the season goes, we will hit them more than not,” offensive guru Coach Heath Poppe stated.
The offensive linemen Poppe boasts about are Lalo Hernandez, Jason Costilla, Gabriel Hewtty, Wyatt LaFond, Seth Deleon, Julian Gonzalez, Jacob Delaney, and Corey Dirck.
Getting defensive
JV Defensive Coordinator Scott Taylor had this to say about his squad’s whitewashing of the Coyotes. “Our defense played well. It helped that all four linebackers were healthy and finished the game. Aaron Saenz, Nick Ortiz, Brandon Martinez, and Jonathon Weinkam man those positions.”
Gus Puente and Elijah Sanchez not only ran the ball extremely well Thursday, but also made their presence known on the other side of the ball.
“Elijah and Gus both played well at rover while Camden White and Caden Hanson did some good things for the secondary,” stated Taylor about two of his many two-way players.
It takes a team-effort to keep other teams off the scoreboard so others also made an impact in the shutout. Taylor stated, “Jacob Delaney and Colt Hackebeil held down the front along with defensive ends Corey Dirck, Blain Davis, Seth Deleon, and Josiah Martinez.”
“Overall we showed a big improvement from week one to week two. It was a really good win,” Taylor finished saying.
Scoring recap
DEV—Elijah Sanchez 50-yard run (Caden Hanson two-point run), 8-0, 4:00, 1st.
DEV—Sanchez 32-yard run (Brandon Martinez two-point run), 16-0, 7:00, 2nd.
DEV—Blain Davis 3-yard run (Hanson PAT), 23-0, 5:22, 4th.
DEV—Ignacio Cisneros 3-yard run (two-point attempt no good), 29-0, 1:24, 4th.
Up next
The JV takes on Randolph Thursday, September 10 at Warhorse Stadium. Kickoff is set for 5:30pm. Get to the stadium early for check in procedures.
By Jerel Beaty
Staff Writer