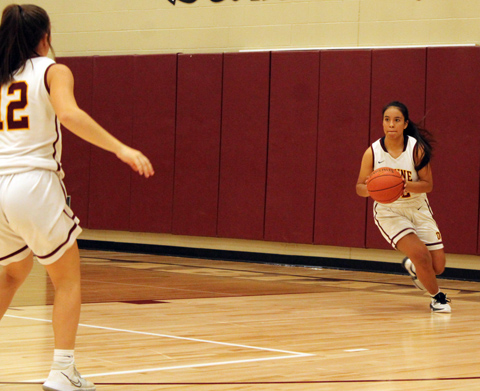 The JV Arabians faced down Pearsall and Crystal City during the holiday break. Coach Hannah Thompson and her team are well prepared for district to start Friday against Brooks Academy. The JV ends pre-district 10-7.
They recently faced the Lady Mavs and pulled out the win in an exciting 3-point game. Pearsall is always a tough team and they had the lead at the end of the first quarter at 6-4. Devine stepped up and the second quarter went back and forth ending 13-12 in Devine’s favor. At halftime, the JV squad came back onto the court and took control. Outscoring Pearsall 21-16, they held onto that advantage and won 43-40.
Leading the team in scoring was Lilly Espinosa with 17 points and Natale Valle with 16. Airyanna Rodriguez sank 6, Oakley Malone had a three-pointer, McKayla Rivera scored 4 points, and Maddie DuBose scored 4 points. The scoring breakdown by quarter was as follows: Q1 4-6, Q2 13-12, Q3 34-28, Q4 50-43. FTP 63%.
Crystal City was Devine’s last pre-district game and the Arabians put lots of hard work into play. Winning 41-28, they ran their offense well and sank shot after shot. Three players scored in the double digits with Valle scoring 14, Rodriguez 12, and McKayla Schnatz 11. Malone had a free-throw and Avery Mobile also scored 2 points. The scoring breakdown by quarter was as follows: Q1 11-4, Q2 22-13, Q3 33-21, Q4 41-28.
By Dicy Chambers
Sports Writer