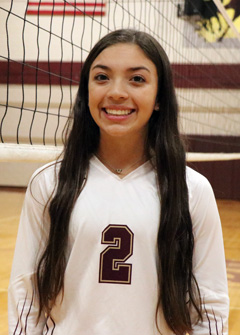 As just a Junior, Avery Cruz has been named to the Texas All State Blue Team! Cruz was an important back row player. Playing in all 123 of the Arabians’ sets played, Cruz earned very impressive stats. She had 123 kills, 29 aces, 586 digs, 47 assists, and 629 serve receiving along with earning a district title, and making it to the Regional Quarterfinal playoffs.
This season Crus was also named the Defensive MVP in the district as well as Academic All District.
“I worked very hard this season but never imagined I would be asked to play in an All Star game. I’m very excited to play this summer and be able to represent our school,” said Cruz when she was asked about this season.
“Avery stepped into a needed role on varsity as a sophomore and really turned some eyes. She was not afraid to sacrifice her body to keep the ball alive. This year she stepped into the libero position during the tournament season and did a great job in that role. She was one of our best receivers and really did a great job on defense on keeping balls alive for us. Avery and her teammate Kristina Morales really pushed each other the last couple of years to get better and better on defense. I know Avery is going to do a great job in the All Star game in July as she goes against some of the best hitters in the state of Texas. She is going to be a great representative of the Arabian program and the Devine community at the All Star game,” said Coach Leigh Anne McIver.
Cruz will return to the court next season and it will be another impressive one for this player with the help of other returning varsity, they will have another long play-off run.