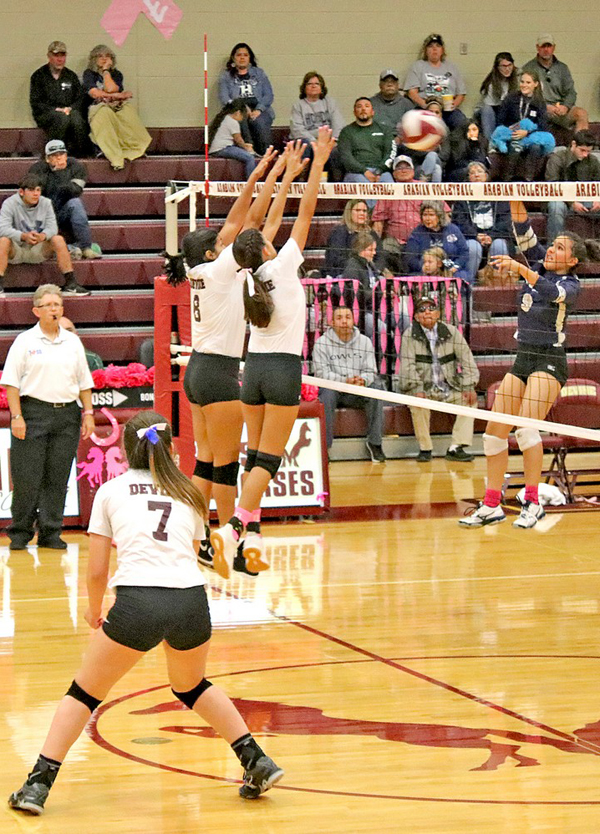 In the Annual Dig Pink game against Carrizo Springs, the JV Arabians dug out two wins at 25-14 and 25-18. “The girls came out on fire for this game and kept up their intensity and excitement from the beginning. This team handled business and started out the second round of District with another win. They went out there and played for an incredible cause and we thank everyone for making this Dig Pink night successful.” Coach Kailee Ramirez
Lacey Shook 3 kills, 3 digs, 2 aces. Brooklyn Crossland 1 dig, 2 aces. Zoe Gonzales 5 kills, 3 aces. Amber DuBose 1 dig, 8 assists, 1 ace. Bri Torres 3 kills, 1 dig. Darian Alvarez 1 kill, 2 digs, 2 aces. Cece Martinez 2 digs, 3 aces.
Crystal City
With their sights set on an undefeated district season, the JV Arabians are just two games away from that goal. They will face Pearsall at home on Friday and then play in Hondo Tuesday, October 29th. They are 16-8 overall and 6-0 in district.
The JV Arabians quickly put away Crystal City on October 18th in just two sets at 25-21 and 25-17. “The girls are continuing to improve every game. It is awesome to see us doing things that we were struggling with at the beginning of the season. Of course there are some skills we could always improve on, but we are getting a step closer to our goal every game. I am so proud of them, and we will continue to work hard and get better as a team.” Coach Kailee Ramirez
Lacey Shook 2 digs. Brooklyn Crossland 2 aces. Zoe Gonzales 2 kills, 1 ace. Kaitleyn Morales 2 kills. Amber DuBose 1 kill, 3 digs, 8 assists. Bri Torres 2 aces. Darian Alvarez 1 kill, 2 digs.
By Dicy Chambers
Sports Writer