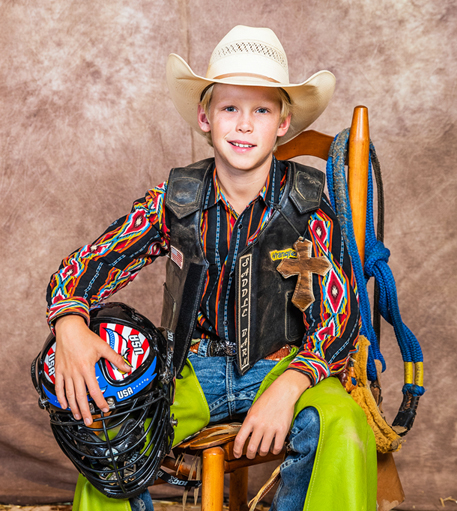 Enoch Hall, of Bigfoot, started riding sheep at a very young age (3 or 4) years old, and his family and friends are proud to say he has now captured the International Mini Bull Riding Association (IMBRA) Reserve World Championship Title!

11-year-old Enoch is a 5th grader at Devine Intermediate, and his parents TJ and Kasey Hall couldn’t be more proud!

“We are a rodeo family so whatever rodeos his mom and I were competing at, we would enter him in mutton bustin (sheep riding) and they would let him ride. He started winning soon after he started competing. He’s had love for the sport of rodeo since the beginning. He has always worked very hard at everything he has done, and this IMBRA World Finals were no different,” his dad TJ said.

“He practiced riding his practice bulls at home up until the day before we left for Mesquite. In round one he drew a pretty tough bull to ride, but he hustled through it, placing him 3rd in the first round,” the Halls said. “The second round Enoch drew a little more user-friendly bull but not one that will score a lot of points. Enoch did the best he could do and scored a 70, placing him 8th in that round. Enoch was sitting 5th going into the semi finals where they take the top 20 kids out of the 78 that entered. Enoch drew a really tough bull in the semi finals, that had me way more nervous than him, but once again, Enoch hustled his butt off and covered him. This moved him into 4th place going into the short round. Enoch drew a really good bull in the short round, but the bull was not a day off by any means.”

“Enoch made a really good ride on a really good bull in the short round scoring an 82.5, winning the short round and earning himself a IMBRA Reserve World Championship Title!!!! Enoch rode against some of the most talented mini bull riders in the world. Congratulations to all of the kids that had success in this event. It was pretty amazing to watch,” said the Halls.