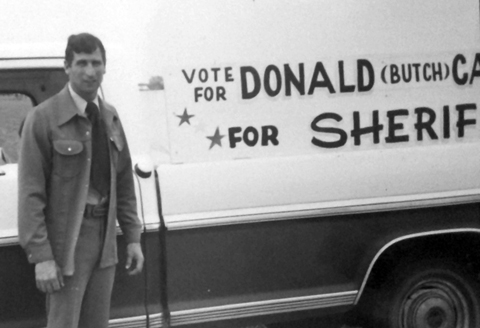 Donald Erwin “Butch” Campsey, Sr., of Devine, served the community in many ways, and brought a smile to nearly everyone he met. He passed away on Sunday, October 4 in Devine with his loving wife by his side.
Campsey was born on February 9, 1948. He is a graduate of Devine High School. He played Quarterback for the Warhorses and the love of his life, Sherry, was a cheerleader. Butch fell in love with Sherry in the 8th grade, but she wasn’t allowed to date until she turned 16, so they had their first date on her 16th birthday. The high school sweethearts were married on August 1, 1969 and celebrated 51 years of marriage this past August.
Campsey served Medina County as our Sheriff for 8 years. To that end, a friend commented, “Sheriff Butch Campsey was a man of integrity, grit, and he always had your back.”
A friend, George Ernest, who served as Justice of the Peace during Campsey’s sheriff days, stated, “Butch was so loved and adored by all the different departments and respected. People trusted him. They loved his down to earth personality and passion for taking care of people. He was a true servant of the community and worked hard to keep the lines of communication open throughout all the emergency departments, not only in the county, but with the highway department and Texas Rangers too. He had a way of making people feel comfortable and trust him.”
Ernest remembered riding with Sheriff Campsey to arrest a man and bring him back to Medina County Jail.
“I was shocked and amazed that he never had to put handcuffs on the prisoner the whole day. We even stopped for lunch. He didn’t need a big pistol on his hip to gain control; he did it through trust and his word.”
Campsey also served as Medina County Judge for 8 years, and as a special education teacher for another 6 years later in his life.
“He taught me a lot of things,” said one of his children, “But there is one thing I use daily….Always be prepared to be the first in line when you are asking people to do something difficult. He was a true servant and a leader.”
Family members and friends will remember his kind, gentle heart, and that he would give his last dollar to someone in need.
Campsey was also a story-telling extraordinaire , who could make anyone laugh just by looking at you. “We all loved the countless stories he would tell though we never knew if he was pulling our leg or telling the truth,” a family member adds.
In the final years of his life, Campsey fought a long but heroic battle with Alzheimer’s. Although he lost his ability to communicate, he never for one minute ceased to be himself. “He was many things to many people. Always loved and respected.”
He is survived by his wife Sherry Campsey, children Jennifer Franklin and husband Stephen; Donald E “Butchy” Campsey and wife Jennifer, Robert Campsey, Jacob Campsey and wife Jenah, and son-in-law Bruce Sollock; and grandchildren Maddison Sollock, Corey Sollock, Connor Sollock and fiance Britttany Moore, Johnny Campsey Jr., Olivia, Ethan, and Emma Franklin, Kingston Mangold, and Emerie and Levy Campsey; and one great grandchild Kaia Christiana Sollock; brothers: Ronnie Campsey (Shana), J.L. Campsey (Theresa), Tom Campsey (Karen), Rick Campsey, Bobby Campsey, Danny Campsey(Mark Waugh), Art Campsey (Jeanene), Billy Campsey. Sisters: Clara Carroll (Chuck), Susie Bourcier (Tim).
He is preceded in death by his parents Arthur “Sonny” and Mary Campsey; a son John Campsey, Sr., daughter Christianna Sollock; sister Becky Campsey Favor; sisters-in-laws Carol Brown Campsey and Debi Crouch Campsey; brother-in-law Jim Favor.
The viewing will be held on Sunday, October 11th from 2pm to 9pm with the Rosary at 7pm at Hurley Funeral Home. Seating will be limited. The Funeral/Mass will be held on Monday, October 12th at 10am at St. Joseph Catholic Church in Devine.