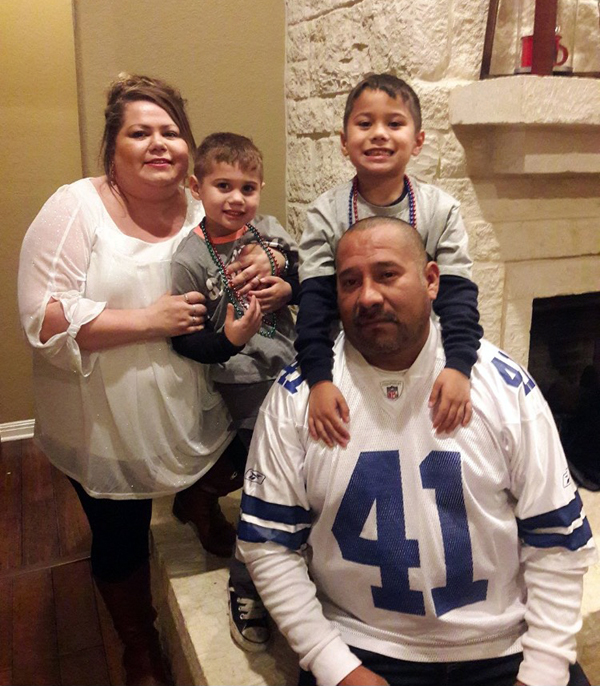 Family and friends of the late Ruben Arausa and family, of Devine, are surrounding his wife and three young children during a difficult time.
Many will know Arausa as he worked for Unison Drilling for many years. But just this February, the family received devastating news.
“He was told he only had two months left to live due to End Stage Liver Cirrhosis in February of 2020,” said sister-in-law Janet Brackeen.
His wife Sharon Brackeen is a 2000 graduate of Devine High School. She met Ruben Arausa and moved to California in 2005 where they had two boys, Jeremiah and Matthew, back to back in 2012. One being born in January and the other in December. They eventually moved to Texas in 2013 where they started to lay down their roots and raise their boys.

“They just had a third son, Jayden, who is just 4 months old now. Sharon had worked for GEO for a few years but took off to dedicate all her time to taking care of Ruben while juggling life as a mom of three young boys. Any kind of donation is greatly appreciated. Cash for bills and funeral costs, clothes for the boys, diapers, Gift Cards, anything will help,” said her sister Janet.
“He was a great dad,” said sister-in-law Janet. “He was very loving to his boys. He spoiled them rotten and tried to teach them about God and Heaven. He always made sure they prayed at the table before eating. Ruben also loved to help the boys with their homework and taught them their ABCs and 123s. Even though he didn’t have much time with the baby he loved him very much too. We call him Jayden but his first name is Ruben after his dad. Ruben was the type of person who would give the shirt off his back if you needed it. He will be greatly missed by everyone.”
They have set up a Go Fund Me fundraiser online for this beautiful family who lost husband and father, Ruben Arausa, early Sunday morning.
Click here to visit the The GoFundMe account.