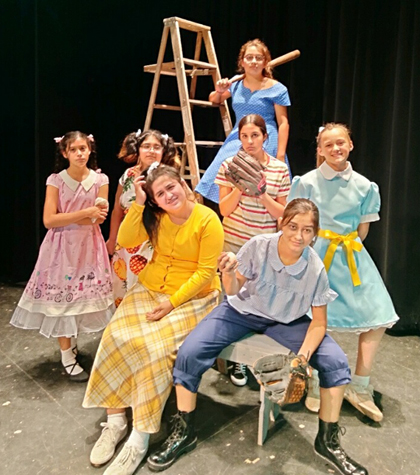 Young actors  Miranda Guerrero, Gwyn DeLeon; middle row: Julianna Castro, Angel Gonzales, Isabella Flores and Kenzie Schott; and on ladder: Jaide Hoover will take the stage with Jacelyn Delaney, Marshall James and Jack Rumfield to present Once Upon a Playground for the public.

The Devine Middle School One Act Play competition team will perform for the community on Thursday, December 9, 2021 at 7:00 pm in the Devine Student Activity Center. This year’s competition play is Once Upon a Playground by Jack Frakes published by Samuel French. The team will compete on December 11, 2021 at 4:00 pm in the new Hondo High School Performing Arts Center.
This ensemble play features ten young actors. Wanda Bun (Isabella Flores) is the unofficial leader of the group. Her faithful sidekick Tootie Shoe (Juliana Castro) is always there to support her every move. The play is set on a typical playground in 1950. Didi Fee (Gwyn DeLeon) is a tough girl who can take care of herself. Forda Moore (Angel Mason) worries about her weight while Phoebe Dive (Kenzie Schott) is tripping around the stage because she won’t wear her glasses. Dixie Wicks (Jaide Hoover) hates her braces. Flirt Stevens (Miranda Guerrero) is worried about being “dumb” and Georgie (Marshall James) tells big stories in the hopes of getting everyone to like him. The group has a new target to pick on when an unknown girl wanders into the playground. The Girl (Jacelyn Delaney) just wants to play but the group won’t let her in because she has a “funny nose”.
Once Upon a Playground explores the dynamics of children who are trying to find out where they fit in. They all have differences but they don’t want to BE different. The Girl finally finds a friend in The Boy (Jack Rumfield) who is also new to the neighborhood.
And never to be forgotten, the silent ninjas who make the show sparkle and give us music—The Crew! Leading the crew is Eirys Wallace as the Stage Manager. Curtis Kuykendall makes us sparkle by controlling the light board. All those great sounds and music? Thank Robert Herrera on Sound. Our Cast is looking great due to the hard work of our Costume Mistress Jessica Ballesteros. And finally, where would we be without our stuff? Olivia Fullenwider keeps track of all the props as the Prop Master.
The performance is free to the public but donations will be gladly and gratefully accepted.