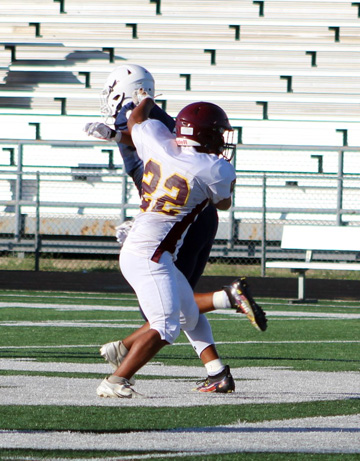 The Navarro Panthers visit Warhorse Stadium Thursday, August 19 to take on Devine in both teams’ final tune up prior to their season openers on August 27. The perennial power Panthers had another stellar season in 2020, going 11-3 overall including capturing a District 14-4A DII championship with a perfect 5-0 record.
Navarro’s season ended prematurely to district rival Wimberley in the state quarterfinals by a score of 14-35.

“We learned a lot about ourselves after scrimmaging Central Catholic last week and we are eager to see the improvements we made in practices this week carry over into the Navarro scrimmage,” said Warhorse Head Coach Paul Gomez. “We watched the Central Catholic film Saturday, and started getting better with this past Monday’s practice. We are especially focusing on our execution and overall play.”
After having their eyes set on a season-ending date at Jerry’s World in Arlington, Navarro’s season ended to district rival Wimberley in the state quarterfinals by a score of 14-35.
This season, Navarro Head Coach Rod Blount is preparing new faces to carry on the rich tradition of Panther football as he has only five starters returning from the 2020 team.
Devine has scrimmaged Navarro for several years now leading into their first game of the season. Gomez likes having the Panthers as his team’s final scrimmage because Navarro will come “hit you in the mouth” and wants to see how his players respond to aggressiveness in other teams.
“Navarro, like us, is known for having physical, tough players. My coaches and I want to see our players respond positively with their own aggressiveness and taking the fight to them. How we respond will show us what type of team we have, especially in those pressure-type situations,” Gomez stated.
As the regular season nears, players, fans, coaches, and the entire community is bracing itself for what hopes to be a terrific Warhorse football season.
A good indication of how a season could unfold can most of the time be traced to how the Warhorses faired against the Panthers.

“We are excited for this week. Our goal is to get better, become mentally tougher, and for us to operate like a well-oiled machine come game time,” Gomez said about his expectations for his Warhorses.
Towels, towels, towels
Shower/bath towels are in demand around the Warhorse and Arabian locker rooms every year. There cannot be a monetary admission charge for a scrimmage, so the Devine athletic programs are asking for towel donations instead.
All size towels are needed so it does not matter if they are large, medium, or small but please make sure they are bath towels and not hand towels.
Scrimmage times
The Freshman take the field at 5:00pm followed by the JV around 6:00pm. The Varsity Warhorses should start around 7:15-7:30pm.
By Jerel Beaty
Staff Writer