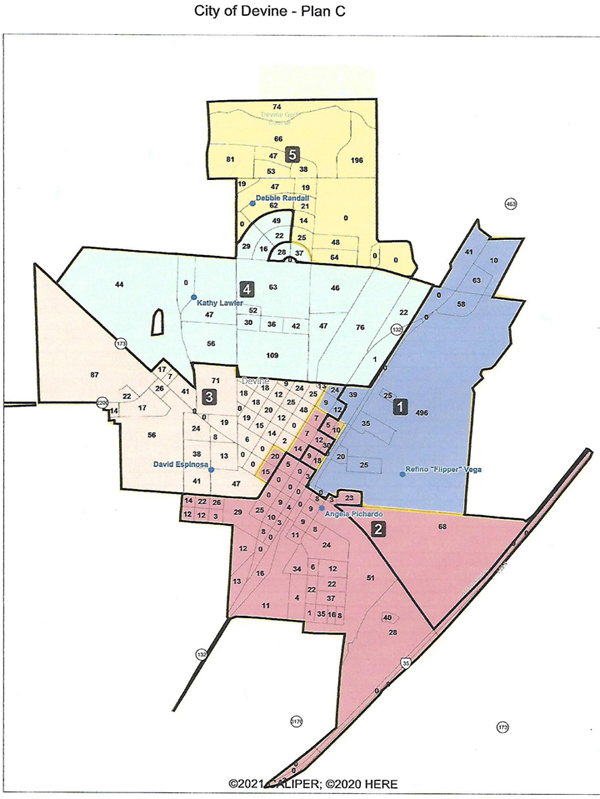 Some Devine residents will find themselves in a different municipal voting district after the Devine City Council approved a redistricting plan during the Special meeting held last Wednesday, December 29, 2021.
The new plan, which incorporated feedback from Council and will be in effect for the upcoming May election, is based on 2020 Census data and spreads the City’s population of 4,324 more evenly between ¬its five districts, with a deviation percentage of 2.66 percent.
Deviation percentage is calculated by subtracting the population of the smallest district from the population of the largest district. The resulting number is then divided by the ideal number, which is found by dividing the total population by the number of voting districts (see “Devine City Council discusses redistricting, sets Public Hearing for Nov. 18” in the Oct. 27, 2021 ed. of The Devine News for more on deviation percentage).
Deviation between districts must be no more than 10 percent in order to be constitutional. To achieve that, Districts 1, 3, and 5 ceded residents to Districts 2 and 4, with the following results: District 1 – 857; District 2 – 866; District 3 – 875; District 4 – 852; District 5 – 874.

San Antonio attorney Rolando Rios, who specializes in voting rights and redistricting law, presented three plans – A, B, and C – to Council.
Plan A, which Rios crafted, had a deviation percentage of 4.05 percent, while Plans B and C, which were both created with Council input, lowered the deviation to 3.24 percent and 2.66 percent, respectively.
“[Plan C] takes the changes that were made to Plan B and keeps it the same and then makes some changes to lower the deviation to 2.66 percent,” Rios said.
After brief comments from Council, a motion by District 4 Councilwoman Kathy Lawler and District 2 Councilwoman Angela Pichardo to adopt Plan C passed unanimously support from District 1 Councilman Rufino “Flipper” Vega, District 3 Councilman David Espinosa, and District 5 Councilwoman Debbie Randall.
Espinosa chaired the meeting in his role as Mayor Pro-Tem in the absence of Mayor Cory Thompson.
An archive of the live stream of the meeting is available at cityofdevine.org/live-council-meetings/.
The next Regular meeting is scheduled for Tuesday, January 18.
By Marly Davis
Staff Writer