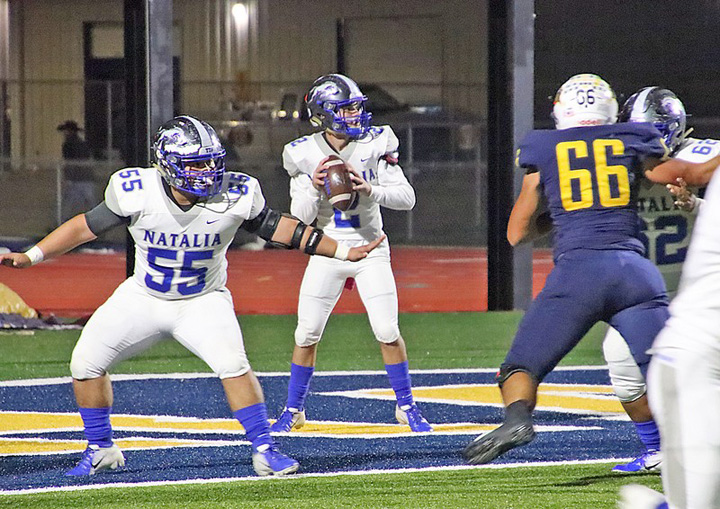 The Natalia Mustangs (6-2, 2-1) will welcome the Nixon-Smiley Mustangs (3-5, 1-2) to town Friday Night for Natalia Homecoming 2019. Natalia is coming off a frustrating loss to reigning champion Poth, as Nixon-Smiley is coming off an upset lop-sided win vs. Skidmore-Tynan 40-12. The bottom line is the boys in blue must re-group, re-focus, adjust a few things and win Friday night to stay on track for a playoff appearance in 2019.
Nixon-Smiley Preview
Nixon-Smiley had their best game of the season last Friday night with a 40-12 win at home vs. the Bobcats. Looking at their season, they started off with a 34-0 home victory over Pettus before dropping five of six road games in a row. They fell at George West 50-7, beat Hallettsville Sacred Heart 19-0, fell to Cole 41-19, fell to Falls City 63-28, fell to Poth 61-0 and fell to Stockdale 48-20.
The Mustangs return eight offensive starters and two or three on defense from their squad a season ago. A season ago, they finished 0-10 overall and 0-5 in league play as Natalia dominated this battle 46-6.
“Nixon-Smiley runs the Triple-Option offense and their QB #11 is a big physical kid,” Martinez said. “#5 is their FB and is also a big kid who is a load to bring down. They are big up front and their slot backs can move. We will have to be very disciplined in our assignments.”
“Defensively, the Mustangs are very multiple up front, but base out of a split look,” Martinez said. “They bring a ton of pressure and force you into some tough situations.”
Natalia Outlook
Natalia will need to prevent the early mistakes and turnovers and control the line of scrimmage in order to be successful Friday night. Natalia will have a game plan that benefits their personnel on the field and must execute and strike early putting Nixon in a hole.
“We are excited about the opportunity we have to get better and improve over the next two games,” Martinez said. “We know we still have a lot to play for. We are going to focus on us and getting better. We know if we do that, we have the ability to play with anyone we step on the field with.”
Kickoff is set
Parents Night 2019 will begin at 6:30 p.m. and the kickoff will begin at 7:30 p.m. Be sure to come out, wear blue, be loud and cheer on Natalia as they play the red and blue Mustangs in a HUGE home game with lots on the line when it comes to playoff implications and seeding.
By Eric Smith
Staff Writer