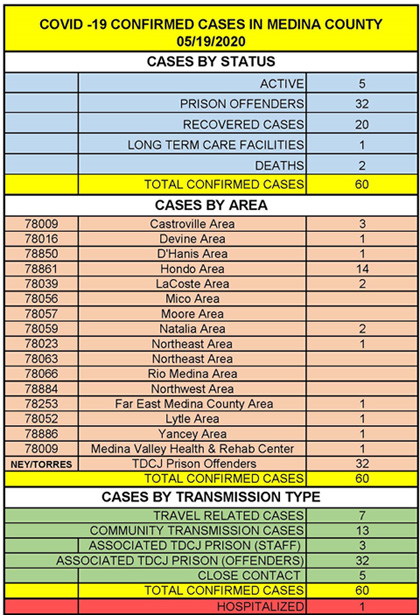 In our weekly COVID-19 update with county leaders, we discussed testing, rising cases in our local prisons, and the new case confirmed in a Castroville nursing home this past week.

“This nursing home resident was actually asymptomatic,” said Judge Chris Schuchart. “It could have easily been spread to others before she was tested, so we are worried about that.”

Thankfully, this nursing home was taking extreme preventative measures that detected the COVID virus even though the patient wasn’t sick.

“Medina Valley Health and Rehab is very proactive and made the decision to test all of their staff and residents over a week ago, and that is how they found this case,” adds Medina County Health Unit Director Patrica Mechler.

It was a proactive move that might have saved many lives.

“This was actually the second round of testing that Medina Valley Health and Rehab did, and I think it is awesome that they proactively chose to do this, ahead of the Governor’s order. The Governor’s order has now mandated that all nursing homes test residents for COVID, and I am glad to see this mandated testing come through,” Mechler stated.

Emergency Manager Keith Lutz adds, “We will be waiting on the rest of those test results to see how it plays out.”

Judge Schuchart stated that the patient is in isolation at the facility.

The number of cases at the Ney and Torres Prison facilities in Medina County has risen by 10 cases since last week. They now have 32 prison offenders who have tested positive and more cases in people who are associated with TDCJ staff. These are recorded on separate lines on the chart.

The Hondo area still has the most cases with 14, followed by Castroville with 3, Natalia with 2, and all other areas including Devine, D’Hanis, Northeast Area of county, Lytle (Medina County area of Lytle), and Yancey are reporting 1 each. The TDJC cases (32) and the Medina Valley Health and Rehab Center case are both recorded on separate lines.

“We will be waiting patiently for those results,” Lutz noted, “As we still haven’t gotten the results of the Hondo drive-up testing site, except for one case which they confirmed is positive. We are hoping that is going to be the only positive.”

While Medina County has seen a surge in the number of COVID cases, sitting at 58 confirmed cases as of Monday, May 18th, most of the new cases are within the walls of local TDJC prisons.

The Driver’s License office will not be re-opened yet for walk-ins. You must make an appointment, and county leaders were unsure when the appointments will begin being set.

“You will be able to pick an appointment time on the DPS website,” Lutz stated, “But that feature is not up and running yet.”