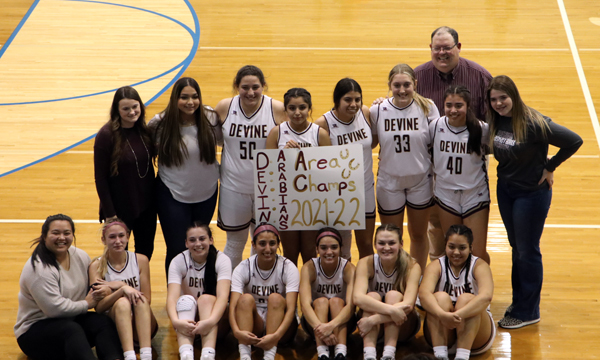 The Arabians headed down to Ingleside to take on the La Feria Lionettes on Friday night. After beating Calallen 37-34 in Bi-District and 2nd in their district, the Lionettes were 13-9 overall and 5-2 in district. Now with a record of 28-7 the Arabians have earned the titles of District, Bi-District, and Area Champions but are looking for more.
The Arabians played their Regional-Quarter playoff on Tuesday night against Kingsville King. The Brahmas beat the Raymondville Bearcats 55-32 and then beat Crystal City 44-35 to advance to Regional-Quarter finals.
Stating for Devine was Lacey Shook, Macey Hein, Jessika Garza, Kadence Yeats, and Lia Romero.
The Area playoff game started with Liah Romero tipping off against a taller Lionette and Romero knocked the ball to Macey Hein. Losing the ball to a foul, the Arabians put pressure on and quickly the ball was back on their end of the court. The Lionettes were first to score but Garza was fouled going up for a basket and she made both of her freethrows. Another freethrow put Devine up 3-2. Rebounding and long passes put the ball in Hein’s hands for a layup between defenders then Yeats put up two after the rebound was passed to her. Stealing a pass, Hein ran it down for an easy layup. Yeats followed Hein on a stole pass and Yeats put in the rebound for a 11-4 lead.
Yeats opened up the second with a long pass from Hein for a basket. Then Mackayla Schnautz was fouled over the back and at the line she made both shots to put Devine up by 10. The Arabian defense kept the Lionettes away from the basket and disrupted their offensive plays. Garza added a point with a freethrow and then the ball was back in the Arabian hands. On that possession, Hein was fouled and after making her first shot, Devine grabbed the rebound. A possession later Garza swished a three and Devine was up 20-5. Hein stole the ball but missed her shot because she was bumped, but that did not matter as Yeats grabbed the ball back and passed back to Hein for a basket. On the very next possession, Hein found the basket again and Devine was up 24-7. Last minute of the half, the Arabians stole the ball and slowly ran their offense to whittle time off the clock. In the final second of the quarter, a Lionette was fouled and she missed both of her freethrows.

The third started with Hien making two freethrows after being fouled by the frustrated La Feria player. With the referees starting to call a tighter game in the third, Devine quickly had three fouls against them. A back handed pass from Hein to Romero was a quick basket with no contest from La Feria. Inbounding under their basket, Hein quickly sank a three before she could be covered. Another three from Hein on the next possession and Devine was up 34-11. The Arabians ran out the clock to end the third 37-14.
Scoreless the first minute for both teams, Yeats made a layup from nearly behind the basket and then without missing a beat, she ran down court to disrupt the La Feria offense. Up 39-18, the Arabians slowed the game down and waited for their openings. Shook sank back-to-back three-pointers and Devine was up 45-18. Rebounding Garza walked in a layup between Lionettes. With two minutes left, Hein was charged with an offensive foul which upset the entire Devine side of the gym. Devine passed the ball around and ran out the clock to win the game 49-23.
“We played a really good game in the Area round vs La Feria. The girls did a great job of knowing their assignments and executing those assignments. They came out with a lot of energy and intensity. We played our game – at our pace – and we really got off to a great start especially on the defensive end of the floor. We had a good lead at halftime and we came out and extended that lead in the 3rd quarter. I was so please at how the girls handled all the emotions based in this game. I was super excited to see this team advance on to the 3rd round of the playoffs,” added Coach Jim Sessions.
Andrea Rios 1 rebound. Lacey Shook 11 points, 3 rebounds, 4 assists, 4 steals. Macey Hein 20 points, 6 rebounds, 3 assists, 3 steals. Kendall Marek 1 rebound. Yessika Garza 8 points, 8 rebounds, 2 assists, 1 steal. Kadence Yeats 6 points, 7 rebounds, 2 assists, 1 steal. Mackayla Schnautz 2 points, 2 steals. Liah Romero 2 points, 4 rebounds. Q1 11-5, Q2 24-7, Q3 37-14, Q4 49-23. FTP 64%.
By Dicy Chambers
Sports Writer