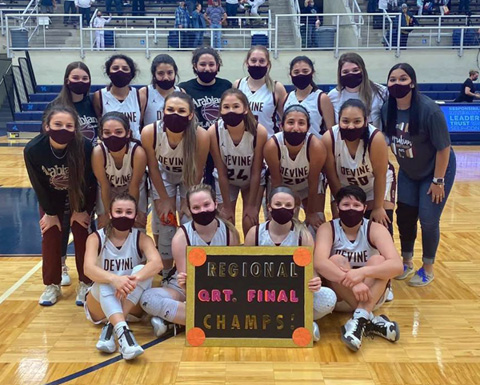 After an amazing playoff run, the Arabians have finished their season as the Quarterfinal champions! They went up against the tough team from Boerne and lost 35-68. The Arabians are proud of all they accomplished this season and are ready to bring it all back next season to push further into playoffs. Boerne has moved on to face Fredericksburg in the Regional Finals
Proud of this team, Coach Jim Sessions had this to say about his team. “We ran into a really tough Boerne team in the Regional Semi-Finals on Friday night. I really thought the girls were excited and ready to go for this game; we just struggled to make shots early. Boerne’s man to man defense was very aggressive and they made us work for our shots. We got some good shots, but we were unable to knock them down and Boerne took full advantage of that early. We missed some shots that had been falling for us all year and then defensively, Boerne shot the ball really well. The trend continued in the second quarter as well and Boerne took a big lead into the halftime break.
Despite being down big at half, we came out in the 3rd quarter and played a much better quarter. We were able to get the ball to fall early and we were able to go on a little run. Unfortunately, the lead was just too big to cut into that late in the game.
I was super proud of how this season went for these young ladies. This team faced many challenges along the way such as cancelled and rescheduled games, injuries, illnesses and weather delays. They faced all of these challenges head on and with enthusiasm. They were District Co-Champions – winning the seeding game to represent 1st place out of the district. They also won the Bi-District, Area, and Regional Quarter-Final games to claim those championships as well. They finished a crazy season with 20 wins to 7 losses and a trip to the fourth round of the playoffs. It really was a great season and a season to be proud of!!”
Lacey Shook 1 assist, 3 deflections. Brianna Bowyer 2 points, 2 rebounds, 1 deflection. Kendall Marek 2 rebounds, 3 deflections. Yessika Garza 5 points, 5 rebounds, 1 assist, 2 steals. Megan Runyan 14 points, 6 rebounds, 1 assist, 1 charge. Kadence Yeats 1 defection, 2 steal. Madison Mata 12 points, 5 rebounds, 2 assists, 1 defection, 1 steal, 1 block. Ally Taylor 2 points, 4 rebounds, 1 steal. Denise Contreras 1 defection, 1 steal.
By Dicy Chambers
Sports Writer