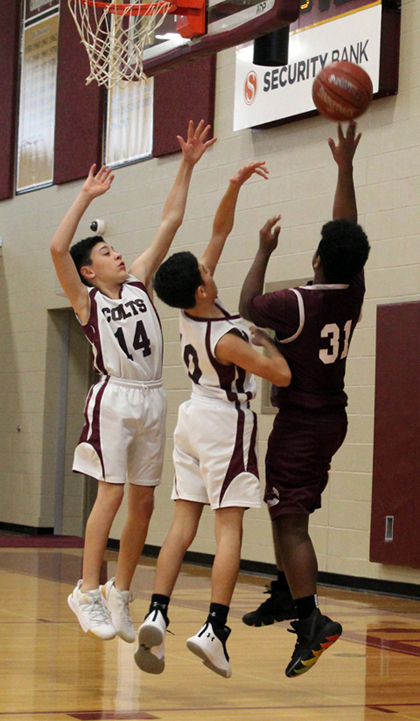 Maroon Colts finish 9-6
The 8th Grade Maroon Colts finished their season strong against Carrizo Springs on January 1st and Poteet on February 3rd. The Maroon Colts lost 26 to 59 versus Carrizo Springs at the Devine Middle School Gym.
Those scoring were Ethan Santos 9, Sammy Guardiola 6, Brandon Martinez 4, Josiah Martinez 3, Quentin Sanders 2 and Adrian Beltran 2. Played but did not score Corey Dirck, Makhi Burford-Zawarieh, and Jonathon Weinkam. Carrizo made shots and sprung out to a six point lead after the first 4-10. They extended the lead to 22 with a score of 8-30 at the half. The Colts won the third quarter by one but still trailed 20-41 at the end of the third quarter and then Carrizo continued to dominate the game finishing the Colts off with a final score of 26-59. This was our worst game of the season. We missed shots on offense and did not play very good defense getting out hustled to loose balls on defense.
The Colt A boys won 29-20 versus Poteet on Monday in Poteet. Scoring for them were Ethan Santos 10, Brandon Martinez 7, Quentin Sanders 5, Sammy Guardiola 4, Adrian Beltran 2, Makhi Burford-Zawarieh 1. Played but did not score Corey Dirck, Josiah Martinez and Jonathon Weinkam.
The team record stands at 9-6. Nice way to finish off the year; expecting good things from this group in the future.
Gold Colts finish 11-1
In their final two games of the season, the 8th Grade Gold Colts won against Carrizo Springs and Poteet to finish their season 11-1. On January 30th, the Gold Colts 53 to 10 versus Carrizo Springs in Devine.
Scoring were Jordan Roberts 20, Victor Schaefer 8, Jose Morales 7, Roger Gutierrez 6, Trinidad Hernandez 4, Hayden Johnson 4, Jordan Barton 2 and Elijah Gomez 2. Two Colts were not able to play due to injury Diego Gerlach and Antonio Gamboa.
The Colts B was up15-3 after 1, 25–5 at half 35-8 after 3 and 53-10 at end. It was a solid game from all.
The Gold Colts won 23 to 21 versus Poteet on Monday, February 3rd in Poteet. Jordan Roberts 13, Trinidad Hernandez 4, Roger Gutierrez 3 and Hayden Johnson 3. Those who played but did not score were Victor Schaefer, Jordan Barton, Diego Gerlach and Elijah Gomez. Antonio Gamboa did not play due to injury.
The Colts were up 11-5 after 1, 14-9 at half 19-15 after 3 and finished up 23-21. Team record 11-1. They held on to win. Good finish to a very successful year.
Courtesy Coach Scott Taylor