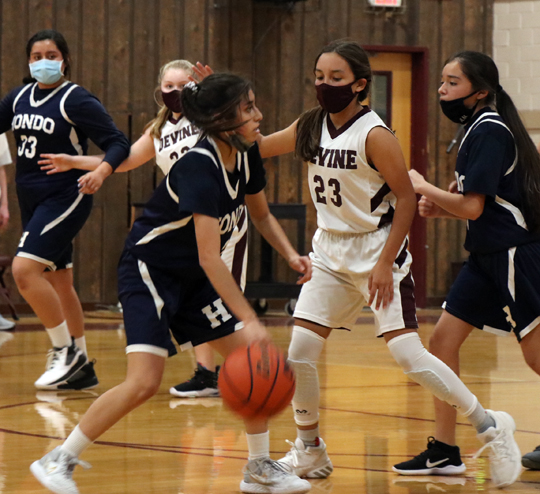 The 7th Grade Maroon Fillys faced their rivals of Hondo on January 14th and they were ready to win this time. They lost the first time they played the Owls this season but this time they nearly had the game but fell short at 24-28. “The Fillys for out quick, pressing on defense, and scoring some quick points on turnovers by Hondo. They lead 10-7 after the first. In the 2nd, Hondo was able to catch up, making the halftime score 15-15. The Fillys come out tough after the halftime and outscored Hondo 6-1 in the third quarter to lead 21-16 heading into the 4rh. But it wasn’t meant to be as Hondo scored 12 points in the final quarter,” said Coach Julie Oropeza.
Scarlett Stotts 2 rebounds. Lilly Owen 2 points, 3 steals, 4 rebounds. Aimee Carr 2 points, 6 rebounds, 1 assist. Kynedie Cruz 5 points, 2 rebounds, 2 assists, 4 steals. Brilee Carroll 4 rebounds. Mariana Urrea 6 points, 2 rebounds, 4 steals. Cami Carroll 7 points, 8 rebounds, 2 steals. Jaelynn DeLeon 4 rebounds.
By Dicy Chambers
Sports Writer