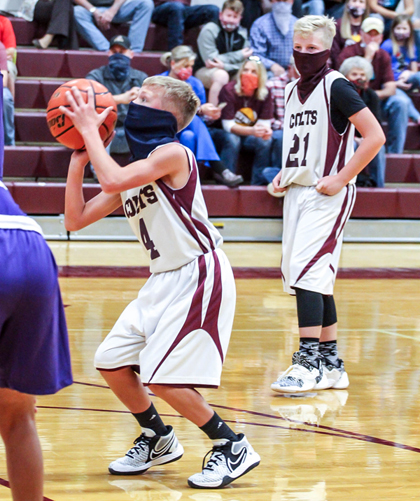 An entertaining, high-scoring affair between the hometown Devine 7th grade Colts and the visiting Carrizo Springs Wildcats had the Colts pulling away in the second half for the 60-43 victory. In a fast-paced game, Devine outscored Carrizo Springs 31-19 in the second half to remain undefeated on the season.
Devine was led in scoring by Karter Brown who tallied 19 points. Mason Beaver also hit the double-digit mark by chipping in 11 points.
The Colts led 12-7 after one period of play and kept that five-point advantage at the break, leading 29-24. Devine widened its margin by the end of the third quarter, using a 17-point frame to take a 46-37 lead into the final seven minutes of play.
Mason Beaver and Tanner Davis hit a couple of dagger-threes to hold off a potential Wildcat rally.
There was only one game against the Wildcats due to Carrizo Springs only having one 7th grade team available to play.
Coach speak
Coach Jacob Sanchez said the following, “The boys faced a little adversity the first half. Carrizo came out hustling and we did not match it at the beginning but we came out the second half and took it to them. This team has had a different top scorer every game, which shows their selflessness. I am very proud of both the A and B team for this.”
Team stats
2pt FG 20; 3pt FG 3; FT 11-26 (42%).
Individual
Karter Brown 19pts, 4reb, 4stl; Mason Beaver 11pts, 1ast, 1stl; Jackson Hagdorn 7pts, 12reb,3blk,1 stl; Ray’Sean Beaver 6pts, 2ast, 1stl; Tanner Davis 5pts, 1reb, 1stl; Karson Ray 4pts, 6reb, 1blk, 2stl; Ethan Dye 3pts, 4reb, 1ast, 1stl; Tyler Hinnant 3pts, 5reb, 2ast, 1stl; Christian Monreal 2reb, 2ast, 1stl; Mason Saunders 2reb.
Up next
The Colts travel to Uvalde to take on the Coyotes Thursday, December 17. The high school gym is used for all four games (7th B/A, 8th B/A). The first game begins at 4:30pm with each following game scheduled in one-hour increments.
By Jerel Beaty
Staff Writer